Among the large cast of microbiome players, bacteria have long been hogging the spotlight. But the single-celled organisms known as protists are finally getting the starring role they deserve.

A group of scientists who study the interactions between plants and microbes have released a new study detailing the dynamic relationships between soil-dwelling protists and developing plants, demonstrating that soil protists respond to plant signals much like bacteria do.

An enormous variety and diversity of microbes live in soil, and studying how these organisms interact with each other and with plant roots is a hot topic in biology, as it has applications for agriculture, land stewardship, and climate change resilience technologies.

"Protists represent a new frontier in the study of soil microbial ecology," said lead author Javier A. Ceja Navarro, a research scientist at Lawrence Berkeley National Laboratory (Berkeley Lab). "Here we show that this group of organisms really must be included in microbial studies aiming to understand how microbes interact with plants."

Protists are not a distinct lineage of organisms, but rather a category assigned to any single-celled eukaryotic organism (an organism whose cells contain a nucleus) that is not a plant, fungi, or animal. This diverse group of 200,000+ species (new ones are being discovered continuously) includes amoebas, diatoms, dinoflagellates, slime molds, and even various parasites - such as the malaria-causing Plasmodium and the eponymous Giardia-causing genus of protozoans.

Protists are found across the planet in a variety of ecosystems. Some species, like certain marine plankton protists and human disease-causing protists have been studied closely. Yet for the majority of species, scientists are just beginning to scratch the surface of what the organism does and how they respond to the environment. Such is the case for soil protists.

According to Navarro, protists are known to control soil microbial dynamics and nutrient cycling by feeding on other microbes. Although there is a good body of knowledge about their interactions with other members of the soil microbiome, little is known about how protists respond to changes in their environment.

"Even though protists are important and their relevance has been known for decades, our study is the first one showing an association of protists with plants in a large-scale field experiment," noted project leader Mary Firestone, a faculty scientist in Berkeley Lab's Earth and Environmental Sciences Area and a professor at UC Berkeley. The project was a collaboration among scientists from Berkeley Lab, UC Berkeley, Lawrence Livermore National Laboratory (LLNL), the Noble Research Institute, and the University of Oklahoma.

The team grew switchgrass - a crop proposed for large-scale biofuel production - from seedlings at two large-scale field sites, and took samples of the soil surrounding the roots of plants at different stages of growth. They used next-generation genome sequencing to identify the types of protists present in each sample and the abundance of each species.

"As plants grow, the cells in their roots release metabolites that send signals out to the surrounding soil environment," added Jennifer Pett-Ridge, a senior staff scientist from LLNL. "We saw that protists communities shift and change in response to the plant's effects - in a manner that is similar to what we've observed for bacterial communities."

"Future studies focusing on understanding the mechanisms of plant establishment in soil will need to consider protists as a key part of the plant microbiome," added Navarro, who is part of Berkeley Lab's Biosciences Area. "Ignoring protists in terrestrial ecological studies will result in a big knowledge gap that will make our understanding of the environmental microbiome incomplete."

Founded in 1931 on the belief that the biggest scientific challenges are best addressed by teams, Lawrence Berkeley National Laboratory and its scientists have been recognized with 14 Nobel Prizes. Today, Berkeley Lab researchers develop sustainable energy and environmental solutions, create useful new materials, advance the frontiers of computing, and probe the mysteries of life, matter, and the universe. Scientists from around the world rely on the Lab's facilities for their own discovery science. Berkeley Lab is a multiprogram national laboratory, managed by the University of California for the U.S. Department of Energy's Office of Science.

DOE's Office of Science is the single largest supporter of basic research in the physical sciences in the United States, and is working to address some of the most pressing challenges of our time. For more information, please visit energy.gov/science.

We've got the dirt on soil protists 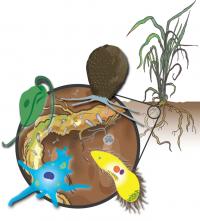