Although condom usage is the best strategy for preventing HIV transmission, the researchers are working to design a device that can be used by sex workers and in situations where women are not in a position to negotiate condom use.

The device is an intravaginal ring (IVR ) that can be inserted into the female genital tract where it will deliver medications known to decrease the transmission of HIV. The researchers examined how effectively their IVR delivered two medications - hydroxychloroquine (HCQ), an FDA approved medication, and a nanomedicine gene therapy developed by the team in previous research. Their results were published in a recent study.

"We've specifically engineered a combination IVR that can deliver two unique medications targeting different aspects of the HIV infection process," said Emmanuel Ho, a professor in the University of Waterloo's School of Pharmacy and study author. "Before, only one drug could be delivered from an intravaginal ring."

The ring is made of medical-grade plastic and contains two segmented sections. One section is solid and coated in a pH-sensitive polymer that releases the customized gene-therapy treatment specifically during sexual intercourse. The other half is a hollow ring with tiny pores that releases HCQ slowly over twenty-five days.

The HCQ is the first line of defence that reduces the immune cell activation - meaning HIV cells have fewer host target cells to interact with. Doing this buys time for the gene therapy treatment which comes in specifically during sexual intercourse to further suppress the expression of cellular receptors that HIV cells attach to.

The team, which has previously partnered with the University of Nairobi in Kenya on related research, recognizes the importance of using medications as judiciously as possible given potentially limited healthcare resources.

The researchers wanted to have a system that can be placed in the vaginal tract but that only acts when there is sexual intercourse. The presence of semen increases the pH of the genital tract. Therefore, they designed the "smart" gene-therapy segment of the IVR to detect that change in pH and to release the nanomedicine at that point in time only.

"This IVR system will help women to protect themselves against HIV infection and greatly reduce drug usage when it is not necessary," says Yannick Traore, a recent Waterloo PhD graduate and lead author on the study. "We are hoping that this will reduce the cost of drug therapy and also prevent users from developing drug resistance."

The unique, segmented design of the IVR is effective. In lab tests, the HCQ segment successfully released the drug slowly and effectively over 25 days and the gene therapy segment responded to the presence of seminal fluid simulant by releasing 20 times more nanomedicine than was released in an environment of only vaginal fluid simulant. The next steps involve testing the IVR in animal models.

The study was recently published in the journal Drug Delivery and Translation Research and features authors from Waterloo and the University of Manitoba. 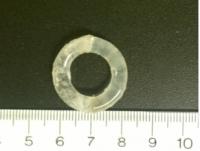