Osaka, Japan - Gross chromosomal rearrangements—where portions of the genome become moved, deleted, or inverted—can lead to cell death and diseases such as cancer in complex multicellular organisms. However, the details of how exactly these occur remain unknown. Now, studies in a single-celled organism called fission yeast have found evidence for the involvement of a protein called Rad8.

When DNA replicates or repairs itself, three copies of a protein called PCNA bind together and form a ring-like structure surrounding the DNA strand. This ring structure acts like a clamp and slides along the DNA strand. The team showed that Rad8 attaches a small molecule called ubiquitin to this PCNA protein at the amino acid in the 107th position. This amino acid is a lysine molecule, termed "lysine 107," located at the interface between the different PCNA molecules.

Ubiquitin attachment is a common biological process serving a variety of functions. "In this case, the attachment of ubiquitin at lysine 107 weakens the interactions between PCNA molecules and changes the structure of the ring of proteins," says lead author of the paper Jie Su. This then alters how PCNA functions and leads to the formation of gross chromosomal rearrangements instead of accurate DNA repair.

But how does this information on a single-celled organism like yeast relate to cancer in complex organisms such as humans? Not much is known about HLTF, the human equivalent to Rad8, but it is seen to be activated and upregulated in cancer. Inhibition of HLTF, or inhibiting the attachment of ubiquitin to PCNA at the human equivalent of the lysine 107 position, could therefore be a very promising new strategy for cancer therapies.

Osaka University was founded in 1931 as one of the seven imperial universities of Japan and is now one of Japan's leading comprehensive universities with a broad disciplinary spectrum. This strength is coupled with a singular drive for innovation that extends throughout the scientific process, from fundamental research to the creation of applied technology with positive economic impacts. Its commitment to innovation has been recognized in Japan and around the world, being named Japan's most innovative university in 2015 (Reuters 2015 Top 100) and one of the most innovative institutions in the world in 2017 (Innovative Universities and the Nature Index Innovation 2017). Now, Osaka University is leveraging its role as a Designated National University Corporation selected by the Ministry of Education, Culture, Sports, Science and Technology to contribute to innovation for human welfare, sustainable development of society, and social transformation. 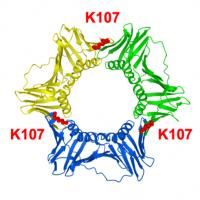