The Covid-19 pandemic has improved perceptions of facial attractiveness and healthiness of people wearing face masks in Japan.

Wearing sanitary facemasks was not uncommon in Japan prior to the Covid-19 pandemic. Public health initiatives during the pandemic have led to a drastic increase in the use of facemasks as they reduce the transmission of the SARS-CoV-2 virus. The sanitary-mask effect is a model that predicted how facemasks affected perceptions of facial attractiveness. However, as mindsets might have changed due to the pandemic, it is likely that the sanitary-mask effect has been altered.

A team of four scientists, including Professor Jun I. Kawahara from Hokkaido University's Faculty of Letters, has revealed that there has been a shift in how the use of facemasks affects the perception of facial attractiveness among the Japanese population. Their findings were published in the journal i-Perception.

As wearing a sanitary facemask has become more common after the onset of SARS-CoV-2 pandemic, the research team speculated that beliefs regarding mask-wearers and perceptions of mask-worn faces have been changed.

In the current study, a survey of 286 adults showed that a larger proportion of respondents believed that wearing a facemask either increased or had a neutral effect on assumptions of healthiness. Prior to the pandemic, the opposite was true. A survey of 59 individuals showed that the perception of mask-worn faces has changed after the onset of the pandemic. In particular, the effect of priming was reduced, so the perceptions of attractiveness were primarily dependent on occlusion; mask color had no effect on these perceptions. Finally, a survey of 44 individuals demonstrated that the perceived unhealthiness of mask-worn faces was lower after the onset of the COVID-19 pandemic compared with before the epidemic. All the observed changes are likely due to the changes in the perception of and messaging surrounding mask use.

The current study has validated the sanitary-mask model by confirming one of the predictions made when the model was first proposed: removing the perception of unhealthiness associated with mask-wearing would reduce the negative impact on attractiveness ratings. This study also revealed the impact of the COVID-19 epidemic, on perceptions of attractiveness of masked faces. The scientists suggest that the sanitary mask effect could reflect the progress of the pandemic, but the surveys need to be conducted on much larger scales to verify this possibility. 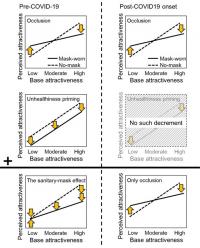 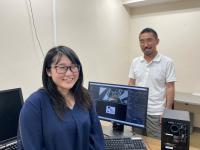 Miki Kamatani and Jun I. Kawahara