In recent years, wildfires on the West Coast have become larger and more damaging. A combination of almost a century of fire suppression and hotter and drier conditions has created a tinderbox ready to ignite, destroying homes and polluting the air over large areas.

New research led by the University of Washington and the University of California, Santa Barbara, looks at the longer-term future of wildfires under scenarios of increased temperature and drought, using a model that focuses on the eastern California forests of the Sierra Nevada. The study, published July 26 in the journal Ecosphere, finds that there will be an initial roughly decade-long burst of wildfire activity, followed by recurring fires of decreasing area.

“That first burst of wildfire is consistent with what we’re seeing right now in the West. The buildup of fuels, in conjunction with the increasingly hot and dry conditions, leads to these very large, catastrophic fire events,” said lead author Maureen Kennedy, assistant professor at the University of Washington Tacoma. “But our simulations show that if you allow fire to continue in an area, then the fire could become self-limiting, where each subsequent fire is smaller than the previous one.”

How climate change, tree growth and wildfires will interact over coming decades is only beginning to be explored, Kennedy said, through experiments and simulations. Existing models of vegetation often assume wildfires will strike at set intervals, like every 10 years, or based on past patterns of wildfire risk for that ecosystem. But those previous patterns may not be the best guide to the future.

“The big question is: What’s going to happen with climate change? The relationships that we’ve seen between climate and wildfire over the past 30 years, is that going to continue? Or is there going to be a feedback? Because if we keep burning up these fuels, and with extreme drought that limits new growth, there will eventually be less fuel for wildfires,” Kennedy said.

The new study used a model that includes those feedbacks among climate, vegetation growth, water flows and wildfire risk to simulate the Big Creek watershed outside Fresno, California, near the site of the September 2020 Creek Fire. Climate models suggest that here, as in other parts of the West, conditions will likely continue to get hotter and drier.

Results of the 60-year simulations show that under increased drought and rising temperatures, the large wildfires will continue for about a decade, followed by recurring wildfires that occur in warm and dry conditions, but are smaller over time. Even without wildfire the trees in the forest declined in number and size over time because they were less productive and more stressed in the hot and dry conditions. These findings would likely apply to other forests that experience drought, said Kennedy, who’s now using the model on other regions.

What happens with wildfires over the longer term matters now for planning. Current understanding is that communities will have to coexist with wildfire rather than exclude it entirely, Kennedy said. A combination of prescribed burns and forest thinning will likely be the future of managing forests as they contend with both wildfires and climate change.

“With such high density in the forest, the trees are pulling a lot of water out of the soil,” Kennedy said. “There is growing evidence that you can relieve drought stress and make more drought-resilient forests if you thin the forests, which should also help with, for example, reducing the impact of that initial pulse of wildfire.”

After thinning out smaller trees, managers could then do controlled burns to remove kindling and smaller material on the forest floor. But knowing how to manage forests in this way requires understanding how local weather conditions, plant growth and wildfire risk will play out in future decades.

“It’s important to include climate change so we have an idea of the range of variability of potential outcomes in the future,” Kennedy said. “For example, how often do you need to repeat the fuels treatment? Is that going to be different under climate change?”

Kennedy was also a co-author of another recent study that uses the same model to tease apart how much climate change and fire suppression increase wildfire risk in different parts of Idaho.

“Our ‘new normal’ is not static,” said Christina (Naomi) Tague, a professor at UC Santa Barbara who is a co-author on both studies and developed the RHESSys-FIRE model that was used in the research. “Not only is our climate continuing to change, but vegetation — the fuel of fire — is responding to changing conditions. Our work helps understand what these trajectories of fire, forest productivity and growth may look like.”

This research was funded by the National Science Foundation and the U.S. Forest Service. Other co-authors are Ryan Bart at the University of California, Merced, and Janet Choate at UC Santa Barbara.

For more information, contact Kennedy at mkenn@uw.edu or Tague at ctague@bren.ucsb.edu.

Does hot and dry equal more wildfire? Contrasting short- and long-term climate effects on fire in the Sierra Nevada, CA 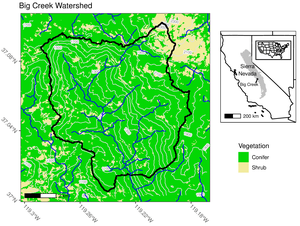 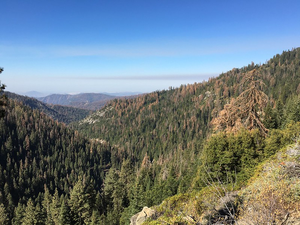