The “megadrought” impacting the Colorado River system this year has been devastating to the 40 million people who rely on it for water. But could this drought have been predicted? Will we be able to predict the next one?

Mountain watersheds provide 60 to 90% of water resources worldwide, but there is still much that scientists don’t know about the physical processes and interactions that affect hydrology in these ecosystems. And thus, the best Earth system computer models struggle to predict the timing and availability of water resources emanating from mountains.

Now a team of U.S. Department of Energy scientists led by Lawrence Berkeley National Laboratory (Berkeley Lab) aims to plug that gap, with an ambitious campaign to collect a vast array of measurements that will allow scientists to better understand the future of water in the West. The Surface Atmosphere Integrated Field Laboratory (SAIL) campaign will start on September 1, when scientists flip the switch on a slew of machinery that has been amassed in the Upper Colorado River Basin.

Over the course of two falls, two winters, two springs, and a summer, more than three dozen scientific instruments – including a variety of radars, lidars, cameras, balloons, and other state-of-the-art equipment – will collect a treasure trove of data on precipitation, wind, clouds, aerosols, solar and thermal energy, temperature, humidity, ozone, and more. That data can then be used to turbocharge the capabilities of Earth system models and answer many scientific questions about how, why, where, and when rain and snow will fall. In close collaboration with researchers specializing in Earth’s surface and subsurface, the SAIL campaign will help the scientific community understand how mountains extract moisture from the atmosphere and then process the water all the way down to the bedrock beneath Earth’s surface. Ultimately, this will provide the tools for scientists to better predict the future availability of water.

“The Upper Colorado River powers more than $1 trillion in economic activity and provides an immense amount of hydroelectric power, but it’s very understudied compared to how important it is,” said Berkeley Lab scientist Daniel Feldman, the lead SAIL investigator. “We’re starting to see really dramatic consequences from the changing water resources, but the details of what is actually going on in these places where the water's coming from – those details matter, and that’s what SAIL is focused on.”

From the Arctic to the Rockies

SAIL is a research campaign managed by DOE’s Atmospheric Radiation Measurement (ARM) user facility, a key contributor to climate research with its stationary and mobile climate observatories located throughout the United States and around the world. Much of the equipment being used in SAIL has just returned from a one-year Arctic expedition.

“SAIL is a timely campaign because of the ongoing drought in the Western United States,” said Sally McFarlane, DOE Program Manager for the ARM user facility. “The Colorado River is of particular concern because it supplies water to 40 million people. SAIL is bringing together data from ARM and other research programs from within DOE to ultimately help provide insights into the atmospheric processes and land-atmosphere interactions that impact rain and snow in the upper Colorado River watershed.”

The instruments are mostly housed in large containers sited in the picturesque mountain town of Gothic, Colorado, an old mining town near Crested Butte, Colorado. The facility is hosted by the Rocky Mountain Biological Laboratory, which is dedicated to research on high-altitude ecosystems. A staff of three technicians will monitor the instruments around the clock.

“This is a profound and incredibly unique opportunity and represents a first-of-its-kind experiment in mountainous systems worldwide, bridging the processes from the atmosphere all the way down to bedrock,” said Berkeley Lab scientist Ken Williams, the lead on-site researcher for SAIL.

Having this volume of data at a wide range of spatial and temporal scales will allow scientists to begin to understand the physical processes that may affect mountain hydrology and answer questions such as how dust, wildfire, hot drought, tree mortality, and other phenomena might affect the watershed. Ultimately, the data will be fed into Earth system models so they can “get the water balance right.”

“Our models that predict what future water is going to be – their resolution is now about 100 kilometers [62 miles], but there's a lot of activity that happens in 100 kilometers, a lot of terrain variability, a lot of differences in precipitation, and surface and subsurface processes,” Feldman said. “So really the question is, what are all the details that need to go into those big models, so that we can get them to get the water balance right? And that's why this is really exciting – we’ll be measuring the inputs and the outputs at a fundamental level to develop a benchmark dataset for the scientific community to evaluate and improve their models.”

“ASR research projects during the SAIL campaign will help us learn more about the cloud, aerosol, precipitation, and radiation processes that affect the water cycle in the upper Colorado River watershed,” said Jeff Stehr, a DOE Program Manager for ASR. “Ultimately, this work will help us improve climate models so that they can be used to better understand, predict, and plan for threats to water resources in the arid West and globally.”

SAIL leverages the substantial efforts that Berkeley Lab has already undertaken in this area: it has been leading field studies at the East River watershed of the Colorado Upper Gunnison Basin since 2014, as part of the DOE-funded Watershed Function Scientific Focus Area project. SAIL will build on that research effort, bringing together a wide range of scientific disciplines to create the world’s first bedrock-to-atmosphere mountain integrated field laboratory.

Some of the practical questions the SAIL campaign could help answer include:

Additionally, one of the weather radars will be located at a ski area owned by Vail Resorts, a major Colorado ski resort, which could benefit outdoor enthusiasts as well as scientists. And the research will also be useful to organizations such as water utilities and the Bureau of Reclamation that are experimenting with weather modification technologies, such as cloud-seeding.

Other federal agencies join the bandwagon

All the data collected by SAIL will be freely available to researchers. What’s more, a bevy of researchers from other federal agencies are undertaking field campaigns in the area with complementary research efforts.

The National Oceanic and Atmospheric Administration (NOAA), a Department of Commerce agency, has launched a project called SPLASH, or the Study of Precipitation, the Lower Atmosphere and Surface for Hydrometeorology, to improve weather and water prediction in the Colorado mountains and beyond. It will also be making detailed atmospheric co-observations in the SAIL study area.

The U.S. Geological Survey (USGS), a Department of Interior agency, has developed an Upper Colorado Next Generation Water Observing System (NGWOS) to provide real-time data on water quantity and quality in more affordable and rapid ways than previously possible, and in more locations.

“It’s quite rare for a single research question, the future of water in the West, to integrate the research activities of investigators across multiple federal agencies,” Williams noted.

But the scale of the challenge, and the prospect of a low- to no-snow future, calls for nothing less than an all-hands-on-deck response by scientists. “We need to understand the range of risks that we’re facing moving forward,” Feldman said. “The term ‘no-analog future’ is a really big one for us.”

Mountains of data: An unprecedented climate observatory to understand the future of water 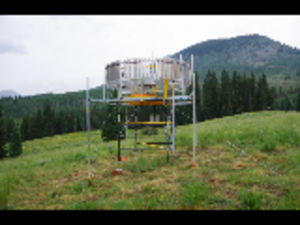 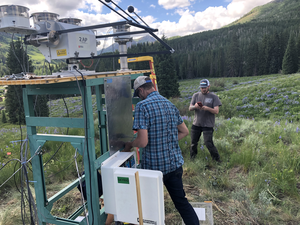