In civil engineering “buckling” is a dirty word with the buckling of beams and columns leading to mechanical failure – and is something that engineers want to avoid.

But for some plants, buckling is being employed to advantage.

Flowers use several different strategies to lure pollinators. Chemical colour from pigments is just one of these strategies and recent research is finding that iridescence could be just as important for attracting pollinators like bees.

This optical effect is produced by an intricate pattern of nano-scale ridges on the surface of petals that diffract light to cause iridescence, like that seen on the surface of CDs or soap bubbles, but how the plant develops these ridges was not known.

Research from the University of Cambridge has demonstrated that plants employ buckling to precisely alter the deformation of the surface of petals in hibiscus flowers. The findings are published in Cell Reports today.

“The petal striations on hibiscus flowers develop during petal growth, and Professor Beverley Glover’s team, who were the first to discover the iridescence properties in flowers, suspected that they may be caused by mechanical properties as the petals expanded”, said Dr Sarah Robinson in the University of Cambridge’s Sainsbury Laboratory and lead of the research.

Working with members of Professor Glover’s team, Dr Robinson was able to test this model by using a robotic system, called ACME (automated confocal micro-extensometer) that she had earlier developed to measure mechanical properties in plants. They applied a specific force to stretch immature hibiscus (Hibiscus trionum) petals that had not yet developed striations to see if it was possible to mechanically induce the patterns. “The ACME developed by Dr Sarah Robinson gave us the unique chance to investigate if Hibiscus striation patterns could be mechanically induced.’’ said Dr Chiara Airoldi, in the University of Cambridge’s Department of Plant Sciences and first author.

The buckling occurs in the cuticle, which is a waxy surface covering made up of two layers. It is these two layers with different mechanical properties that makes the buckling possible.

“Using buckling theory we postulated a model and recreated the experiment. This allowed us to illustrate why some cuticles wrinkle and others do not, emphasising the role of layers.” said Dr Carlos Lugo, in the University of Cambridge’s Department of Plant Sciences.

“Using cryo-SEM (scanning electron microscopy) fractures we have been able to show that the cuticle that striates has two physically distinct layers. We are further investigating the development of hibiscus petal striations through a combined approach of mathematical modelling and measurements of physical properties of the layers.” said Dr Airoldi.

An estimated 35 per cent of the world’s crop harvest relies on animal pollinators and with pollinator populations in decline, understanding how the relationships and signalling operate between plants and pollinators is of growing importance.

Mechanical buckling can pattern the light-diffracting cuticle of Hibiscus trionum 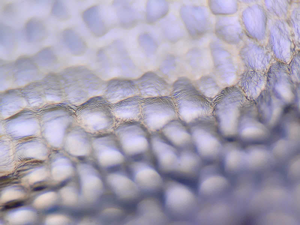 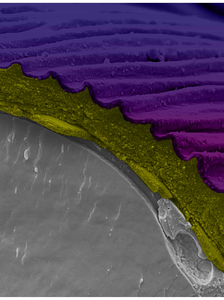 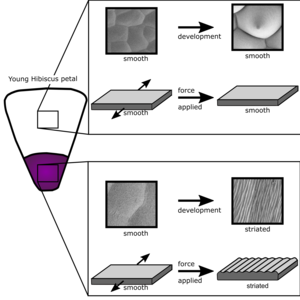