The neurotransmitter dopamine influences the activity of a wide variety of brain areas. A deficiency of this substance can have drastic consequences: The death of dopamine-producing nerve cells in the substantia nigra - a particularly sensitive part of the brain - is what causes the core symptoms of Parkinson's disease. An international team from the University of Bonn has now investigated the role played by the transcription factor BCL11A in mice and human cells. If this important factor is missing, the neurons are even more sensitive and more likely to die. The researchers suspect that BCL11A plays a protective role for neurons. The study is now published in Cell Reports.

The human midbrain contains nerve cells that produce dopamine (dopaminergic neurons). "This neurotransmitter influences other neurons by amplifying or dampening their activity," explains Prof. Dr. Sandra Blaess from the Institute for Reconstructive Neurobiology at the University Hospital Bonn. Like the treble and bass controls on a radio, these special neurons do not change the song or the tune, but they can drastically alter the effect. Dopamine-producing neurons also play a major role in Parkinson's disease: the dopamine cells located in the substantia nigra, a dark-appearing structure in the midbrain, die off. The resulting lack of dopamine causes the movement dysfunctions associated with the disease.

The dopamine-producing neurons form extensive connections in a large number of brain areas, for example in the cerebral cortex or the striatum. "This raises the question of whether there are specialized groups within these dopaminergic neurons that affect only certain areas of the brain," Dr. Emmanouil Metzakopian of the UK Dementia Research Institute at The University of Cambridge explains, who contributed data on human cells to the study. The transcription factor BCL11A is known to be important for determining cell properties, for example in the cerebral cortex and also in the immune system. Prof. Blaess' team now investigated for the first time what role BCL11A plays in the different properties of dopaminergic neurons.

The researchers analyzed both developing and mature mouse brains and human cells to determine in which of the dopamine neurons the transcription factor BCL11A is switched on. They then labeled BCL11A-producing neurons in mice with fluorescent molecules, which then lit up under the microscope.

"This allowed us to see which neighboring brain regions the extensions of these dopaminergic neurons grew into," explains Blaess, who is also a member of the Collaborative Research Center 1089 "Synaptic Micronetworks in Health and Disease" and the Transdisciplinary Research Area "Life and Health" at the University of Bonn. The areas in the brain with which the BCL11A-positive dopamine-producing neurons made contact were not arbitrary. For example, the target region was not the entire striatum, which is part of the complex motor control circuits of the cerebrum, but only a small part of this brain area.

The researchers investigated neurodegenerative processes in the substantia nigra using mice from the German Center for Neurodegenerative Diseases (DZNE), which had a loss of dopamine-producing neurons, similar to Parkinson's disease. "It is known that in Parkinson's patients, dopaminergic neurons in the substantia nigra die off to a greater extent than neurons in other brain regions," says Prof. Dr. Donato Di Monte of the DZNE, who was involved in this part of the study. "This area is therefore considered particularly sensitive to neurodegeneration."

The team compared dopamine neurons with and without BCL11A in the "Parkinson's mice". In the substantia nigra, this transcription factor marked dopaminergic neurons that were particularly susceptible to neurodegeneration. If the researchers switched off the production of BCL11A in these cells, even more of the dopamine cells perished. "This suggests that BCL11A may have a neuroprotective function," says Prof. Blaess, summarizing the main finding. The molecular mechanism behind this still needs to be investigated in more detail in further studies. Whether the findings can be transferred from mice to humans will also be investigated. 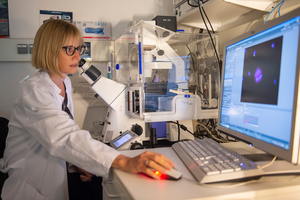