The cold polar oceans give rise to some of the largest food webs on Earth. And at their base are microscopic, photosynthetic algae. But human-induced climate change, a new study suggests, is displacing these important cold-water communities of algae with warm-adapted ones, a trend that threatens to destabilize the delicate marine food web and change the oceans as we know them.

At the base of marine food webs are microscopic photosynthesizing organisms called phytoplankton (from the Greek phyto for ‘plant’ and planktos for ‘wanderer’). But they vary across the global ocean. Phytoplankton communities in warmer waters, including the tropics, tend to be dominated by prokaryotes (microorganisms without a defined nucleus).

Colder waters nearer the poles, however, tend to favor eukaryotes (microorganisms with a nucleus). These photosynthesizing eukaryotes, or algae, form the basis of productive food webs in cold, but fecund polar waters.

“A lot of our food comes from the North Atlantic, North Pacific and South Pacific fisheries, because of eukaryotic phytoplankton — not prokaryotes,” said Thomas Mock, marine microbiologist at the University of East Anglia (UEA, UK) and senior author of the study. “Prokaryotes are not capable of producing all the juicy proteins and lipids that eukaryotes are.”

But according to a new study published September 16, 2021 in Nature Communications, warmer waters and communities dominated by prokaryotes could replace those of eukaryotes much more easily than previously suspected.

“That would cause significant consequences on the entire food web, and therefore ecosystem services that we all depend on,” said Mock.

Mock and the other lead scientists had embarked on the study — a collaboration of eight institutions led by UEA and including the U.S. Department of Energy (DOE) Joint Genome Institute (JGI), a DOE Office of Science User Facility located at Lawrence Berkeley National Laboratory — with a desire to understand the nuance and gradation of how eukaryotic phytoplankton communities change with latitude.

The team set out on a Lewis-and-Clark-like expedition to explore, collect and catalog samples, and look for patterns in algal communities, including the algae-associated microbiomes that influence algal diversity and gene expression. Sailing from pole to pole on four research cruises, they dipped their self-closing containers into sea water to sample algal communities along transects in the Arctic Ocean, North Atlantic Ocean, South Atlantic Ocean and Southern Ocean.

After isolating the algal communities on filters, they sequenced DNA ‘marker’ gene sequences to identify the microbes. And in order to determine what genes the algae were expressing, the team sequenced their RNA transcripts. All sequencing was done through the JGI Community Science Program.

Using an ecology metric called beta diversity, the team observed that algal communities didn’t change gradually across the global ocean. Instead, they sharply delineated into two big geographical groups: those in colder, polar waters, and those in warmer, non-polar waters.

In other words, some like it hot; some do not.

“We can think about the ocean, naively, as a sort of homogeneous medium. In reality, it's not — there is variation of nutrients, temperatures, and other physico-chemical properties,” said study coauthor Igor Grigoriev, JGI Fungal & Algal Program Head. “But still, there are no boundaries in the ocean. Yet, what was found here is that there is this invisible partitioning of algal communities.”

The team found that the boundary, or biodiversity ‘break point,’ between these algal communities occurs in moderate waters that have an average surface temperature of about 58 degrees Fahrenheit — a cool intermediate to the ocean’s extremes of about 28 and 97 degrees Fahrenheit.

“The study authors point to this fundamental observation of cold and warm microbial networks, and just how clear and stark the biogeographic boundary is between them. The data is somewhat beautiful in that regard,” said Andy Allen, biological oceanographer at the University of California, San Diego and the Scripps Institution of Oceanography, who was not affiliated with the study.

“But the findings also suggest a certain level of vulnerability we might not have been aware of,” he added. “If the system is perturbed, it could be very hard to return to baseline.”

Climate change is in fact gravely affecting the sea ice and water temperature in polar climes, throwing these polar communities into jeopardy.

“We know so little about these algal communities; they could have beneficial findings, like antibiotics, pharmaceuticals, and novel enzymes that function at low temperature.” said Katrin Schmidt, co-lead author of the study with Kara Martin. “But these ecosystems are literally melting away.”

The team used a model from the Intergovernmental Panel on Climate Change (IPCC) 5th Assessment Report to predict where and how fast the 14 degrees Celsius boundary is moving.

The steady march of warmer waters polewards could have dire consequences for marine organisms in these food webs, said Schmidt. Several whale species, including gray whales and humpbacks, migrate to feed in the polar regions. And shrimp dine on the algae that cling to the underside of sea ice.

One important algae-eater that could be affected by warming waters and shifting algal communities is krill — an organism that thrives in the Southern Ocean, looks like shrimp, and is food for larger organisms such as whales, penguins, and seals. “The biomass of krill at least equals the biomass of all humans on the planet,” said Mock. “This gives you an idea of how significant these organisms are. And now, imagine the base of the ecosystem is changing from cold water, eukaryotic phytoplankton communities to warm water, prokaryotic phytoplankton communities.”

A change in the base would reverberate throughout the food web, like taking a jackhammer to the foundation of a cathedral. What’s more, because phytoplankton (eukaryotic and prokaryotic combined) contribute to an estimated 50 percent of the world’s fixed carbon, altering the balance of eukaryotic and prokaryotic communities could alter the global carbon cycle, the rates at which carbon globally is fixed and metabolized.

Not only that, these changes — brought about by climate change — could threaten marine food industries and other ecosystem services, such as tourism and recreation, on which coastal and island nations, like the UK, depend, said Mock.

“I think that this paper is going to be used to advise policymakers to mitigate the effects of climate change on ecosystems, because we now have a new angle on how warming is impacting these marine communities,” said Mock. The greenhouse gas carbon dioxide (CO2), produced from the burning of fossil fuels, is what’s causing the ocean surface temperature to rise. “What needs to be done is reducing the production of CO2 — this is the first and foremost important thing we need to do.”

DOE’s Office of Science is the largest supporter of basic research in the physical sciences in the United States, and is working to address some of the most pressing challenges of our time. For more information, please visit science.energy.gov. 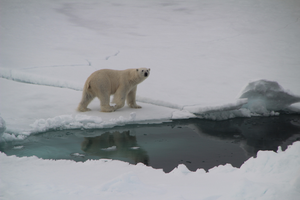 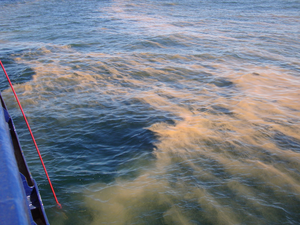