Scott T. Salesky, an assistant professor of meteorology at the University of Oklahoma, is the principal investigator of a recently awarded $530,297 grant through the National Science Foundation’s Office of Polar Programs to study how katabatic winds – cold, dense winds flowing down a sloping surface – impact snow transport and ultimately contribute to the growth of the Antarctic ice sheet.

The study is a collaborative effort between Salesky and colleagues at Columbia University in New York. The NSF funding will allow the OU and Columbia researchers to conduct field work near McMurdo Station, a U.S. research station located on the south tip of Ross Island in Antarctica.

Katabatic winds, also called drainage winds, carry high-density air from a higher elevation down a slope under the force of gravity. Although katabatic flows are ubiquitous in alpine and polar regions, turbulent transport of heat, water vapor, momentum and particles (such as snow) are poorly understood in these flows, undermining the accuracy of numerical weather and climate prediction models.

Salesky said the study is important because, “the Antarctic ice sheet drives many processes in the Earth system through its modulation of regional and global atmospheric and oceanic circulations, storage of fresh water, and effects on global albedo and climate.” Albedo is a non-dimensional, unitless quantity that indicates how well a surface reflects solar energy.

“An understanding of the surface mass balance of the ice sheets is critical for predicting future sea level rise and for interpreting ice core records,” he said. “Yet, the evolution of the ice sheets through snow deposition, erosion and transport in katabatic winds, which are persistent across much of the Antarctic, remains poorly understood due to the lack of an overarching theoretical framework, scarcity of observational datasets, and a lack of accurate numerical modeling tools.”

According to Salesky, advances in the fundamental understanding and modeling capabilities of transport processes in katabatic flows are urgently needed in view of the future climatic and snowfall changes that are projected to occur within the Antarctic continent.

“This project combines fundamental research in fluid mechanics with an important environmental issue—the extent to which blowing snow is contributing to the growth and erosion of the Antarctic ice sheet,” Salesky said. “It will give graduate and undergraduate students at OU and Columbia valuable experience interacting with researchers outside of the core discipline and will give them experience in both numerical modeling and field work.”

“This major research grant by the National Science Foundation to Professor Salesky, which focuses on a critical weather and climate aspect of Antarctica, is highly significant,” said Berrien Moore, dean of the OU College of Atmospheric and Geographic Sciences, Chesapeake Energy Corporation Chair in Climate Studies and director of the National Weather Center. “Advancing our understanding of the polar regions is central to understanding the planet’s changing climate. This award also furthers the university’s strategic plan and the OU Research focus, structure and direction for the coming decade. The university’s younger scientists continue to excel on the national and international stage.”

“The support from NSF will give us a unique opportunity to study the near-surface structure of turbulence in katabatic winds, whose dynamics still elude our complete understanding," said Marco Giometto, assistant professor of civil engineering and engineering mechanics at Columbia University, with whom Salesky is collaborating on the project.

“This focused effort will contribute toward the formulation of a comprehensive theoretical framework for the description of transport processes in katabatic winds, which in turn will lead to advances in our capability to numerically simulate weather in mountainous regions and climate phenomena,” Giometto said. 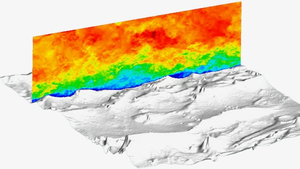 Simulation of atmospheric flow over an ice sheet