Air pollution is responsible for an estimated 7 million premature deaths every year, according to new air quality guidelines recently published by the World Health Organization. That’s roughly one in nine deaths globally.

But except in extreme cases such as wildfires that can spread smoke hundreds of miles, air quality is easily overlooked. Many of the pollutants that affect hearts, lungs and brains are invisible. And current technologies that monitor air pollution can take weeks to collect and process data.

“That’s helpful for epidemiological studies, but it doesn’t tell you what’s going on today,” said Andrew Mason, a professor of electrical and computer engineering in Michigan State University’s College of Engineering.

Teaming up with researchers at Oakland University and the University of Michigan, Mason’s lab is working to empower individuals to better protect themselves and their communities from air pollution in real time. With the support of a $2.78 million grant, the team is creating wearable devices that can track exposure to pollutants and help people steer clear of pollution. The grant is funded by the National Institute of Environmental Health Sciences, one of the National Institutes of Health.

“The whole idea is that the technology we build would go into a future fitness watch,” said Mason. “This would generate data at a level that’s nowhere near available right now. We could deliver information back to the wearer and it would help researchers better understand the health impacts of air pollution.”

The wearable devices would also share information about air quality to create a map of conditions, similar to how smartphone apps can map traffic and navigate drivers to the least congested routes.

“Say you’re going for a bike ride,” Mason said. “You could find the path that’s going to be safer than others, the one with the least exposure.”

Joining Mason on the project are Xiangqun Zeng of Oakland University and J. Timothy Dvonch of the University of Michigan. This is the third grant in which Mason and Zeng are teaming up, but the first two focused on sensing gases in the environment. The new grant work will focus on detecting and identifying pollution in the form of particulate matter, including soot and toxic metals generated by cars, trucks and industrial sources, primarily from burning fossil fuels.

“Atmospheric gases are bad and deadly, too, but the main health impact in air pollution comes from exposure to particulate matter,” Mason said.

Particulate pollution can be especially dangerous for children and people who are pregnant. An analysis of data from the U.S. Environmental Protection Agency also found that people of color are exposed to disproportionately high amounts of particulate pollution.

A network of wearable devices would provide unprecedented data about air quality over space and time, helping inform policies and interventions to help protect the most vulnerable, the team said.

But developing those devices is no small feat. The researchers will need to build technology that can count particles, characterize what they’re made of and determine their size down to nanometer scale.

“Knowing the size is very important,” Mason said. “That determines how far a particle can penetrate into your body when you breathe. How deep will it make it into your lungs? Can it reach your bloodstream?”

On top of all that, the team has challenged itself to become the first to fit such technology into something the size of a wristwatch.

“Currently, there is no personal monitoring device available because of the complexity,” said Zeng, a distinguished professor of chemistry at Oakland University. “The most exciting aspect of this project is its significance and innovation.”

“It will be a challenge to accomplish all of the project goals,” said Dvonch, an associate professor of environmental health sciences at the University of Michigan. “However, the project team is very organized and efficient, and I expect this will allow us to overcome the challenges we may face.”

“We are a dream team because of our complementary expertise,” Zeng said.

As part of the project, the team will be testing its prototypes in Metro Detroit.

“Not only will the developed monitoring devices from our project be applicable to assessing air pollution exposures across many parts of the globe, importantly our project will be able to test, evaluate and begin to address these particulate matter exposure issues right here in Michigan communities,” Dvonch said. 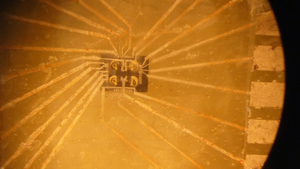