If you had a jar of marbles of many different colors but wanted only the green ones, how could you efficiently pick them out? What if it wasn’t marbles but a jar of glitter, and there was sand, glue, and mud mixed in? That begins to describe the complexity of the brine pumped out from beneath California’s Salton Sea as part of geothermal energy production.

For geothermal fields around the world, produced geothermal brine has been simply injected back underground, but now it’s become clear that the brines produced at the Salton Sea geothermal field contain an immense amount of lithium, a critical resource need for low-carbon transportation and energy storage. Demand for lithium is skyrocketing, as it is an essential ingredient in lithium-ion batteries. Currently there is very little lithium production in the U.S. and most lithium is imported; however, that may change in the near future.

Researchers from the U.S. Department of Energy’s Lawrence Berkeley National Laboratory (Berkeley Lab) have recently published a comprehensive review of past and current technologies for extracting minerals from geothermal brine. The review, published in the journal Energies, discusses and evaluates a broad array of technologies used for extraction of lithium from brines. The review finds that geothermal brines in the Salton Sea region of California are expected to be a major domestic source of lithium in the future but that significant technical challenges need to be overcome.

“One of the major drivers for developing domestic lithium resources now is that we will need a lot of lithium in the future.” said Will Stringfellow, lead author of the paper. “We are dependent on lithium that's extracted from the earth in other countries – and it’s also processed overseas – so we don't have any significant domestic battery production. But there are potentially a lot of lithium resources in the United States that could be exploited. So, we’re looking at whether those resources can be extracted and used in a really environmentally friendly manner, so that they’re truly ‘green’ lithium sources.”

Extraction of lithium from geothermal brines is expected to be particularly challenging. The brine is extremely hot when it comes out of the subsurface, and it contains a rich stew of many dissolved minerals in addition to lithium. “It comes out at over 100 degrees Celsius,” Stringfellow said. “So, you have to deal with the heat. And it’s very, very saline – about 25% by weight. There's a lot of salt, meaning a lot of sodium, a lot of chloride. There's also a lot of calcium and magnesium, and other things like iron and silicon. These are all materials that could potentially interfere with the extraction.”

The Department of Energy (DOE) is interested in both geothermal energy and the lithium supply chain, said Stringfellow, who is an expert on industrial waste treatment and management. “We were commissioned by DOE’s Geothermal Technologies Office to conduct an independent analysis of mineral extraction technology in the context of geothermal energy production,” he said. “There have been previous reviews of individual fundamental processes, but this is, to our knowledge, the first comprehensive review that looked at the more applied-science side of the process.”

Stringfellow and co-author Patrick Dobson, lead of Berkeley Lab’s geothermal systems program, looked at the published literature and industrial and government reports, and conducted a thorough review of lithium extraction technology patents. The most technologically advanced method of lithium extraction is adsorption of lithium using inorganic sorbents, but other promising technologies are also being developed. Inorganic molecular sieve ion-exchange sorbents are being applied for extraction of lithium from brines, and the past and current application of this technology are discussed in the paper.

Dobson and Stringfellow are members of the Lithium Resource Research and Innovation Center (LiRRIC), established at Berkeley Lab to develop science and technology for sustainable domestic lithium extraction, refining, and materials synthesis for applications such as batteries.

Recent projects have focused on how to determine the chemical composition of hot brine in real-time, without needing to cool it down, enabling better process control to maximize the efficiency of lithium extraction. They also are working on technoeconomic analysis with two companies operating at the Salton Sea – Berkshire Hathaway Energy and Controlled Thermal Resources – to see if lithium extraction technologies can be done in a way that makes it cost-competitive with other forms of lithium production. These efforts are supported by the California Energy Commission and DOE’s Advanced Manufacturing Office.

“Berkeley Lab pioneered lithium battery technologies and is continuing to push the forefront of lithium battery innovation by using natural resources and interacting equitably with the communities in which these resources reside,” said Mike Whittaker, director of LiRRIC.

The work was supported by the Department of Energy’s Geothermal Technologies Office.

Technology for the Recovery of Lithium from Geothermal Brines

Sizing up the challenges in extracting lithium from geothermal brine 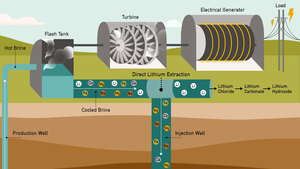