Researchers have completed a comprehensive analysis of the head width of over 1500 species of termites and determined that their size isn’t gradually shrinking at a geological timescale.

Termites belong to the cockroach branch of the evolutionary tree. They split from their sister cockroach group at the end of the Jurassic period, around 150 to 170 million years ago. A popular theory suggests that, after this split, they very gradually got smaller, and continue to do so today. But this new research, published in Proceedings of the Royal Society B, concluded that they rapidly got smaller over a 20-million-year period, then their size stabilized. The researchers, who are from the Evolutionary Genomics Unit at the Okinawa Institute of Science and Technology Graduate University (OIST), claim that the difference in the results from their research compared to the original theory comes from including fossilized species.

Postdoctoral fellow, Dr. Nobuaki Mizumoto, from the OIST Unit originally arrived in Okinawa to study termite behavior. “I wanted to compare the behavior of different kinds of termite species from around the world,” he explained. “I was going to travel to various places and collect them.”

But COVID-19 and the resulting travel restrictions put an end to those plans. So, Dr. Mizumoto turned his focus towards studying something that didn’t require him to leave Okinawa—the evolution of the size of termites.

Termite size, represented by their head width, has been comprehensively measured by taxonomists over the course of the last hundred years. In the past, when researchers catalogued a termite individual, they measured the head width as it is a stable measurement that, unlike body weight, is not affected by sample preservation methods.

Since modern non-termite cockroaches are larger than their modern termite cousins, it’s previously been proposed that termites have been getting smaller since the split. The body size of insects is thought to correlate to the complexity of their society. Smaller insects mean that more individuals can fit in a space. More individuals mean that tasks can be split up and allows for different castes—such as workers and soldiers—to evolve. As termites are social cockroaches, this theory did make sense. However, it had never been robustly tested, until now.

“What’s more,” he continued. “The head width of the ancestor of all the living termite species was estimated around 2mm. Yes, that’s larger than nearly 80% of all living species but it’s still very much within the range.”

In total there are just over 3000 species of termites described. So, the study was robust, examining nearly half the described species. Of those, 1562 are still alive today, whereas 76 are fossilized species. The oldest species looked at lived around 130 million years ago. The head width of the smallest termite was around 0.5mm, and the largest, around 5mm.

“Our analysis revealed that there’s a huge variation between species,” concluded Dr. Mizumoto. “And this includes a lot of fluctuation. Some species are seeing a size reduction, whereas others are actually getting larger. It depends on the lineage. This research provides a really good base for starting to make these comparisons and learning about the evolution of sociality in termites.”

The researchers highlighted that, while many studies focus on the evolution of sociality, especially within social insects, they often focus on wasps, ants, and bees. Indeed, studies on termites are lacking in number by comparison.

“A comprehensive perspective of termites is really important,” explained Prof. Tom Bourguignon, principal investigator of OIST’s Evolutionary Genomics Unit and senior author of the paper. “Most termite research only focuses on the few species that are well-known pests. This research diversifies our understanding of termites.”

The evolution of body size in termites 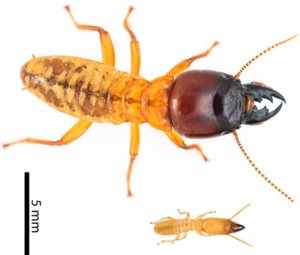 A schematic showing the size variation of termites