Researchers from the University of Warsaw have built the first quantum processor in Poland and are putting it to use in spectroscopy. They’ve demonstrated how quantum information processing can efficiently provide information on matter hidden in light.

Several years ago, physicists from the Centre for Quantum Optical Technologies and the Faculty of Physics of the University of Warsaw designed and built the first quantum memory in Poland, which was further developed into a quantum processor.

“Our processor is based on a cloud of cold atoms. They can efficiently store and process information from light,” describes Dr Michal Parniak, leader of the Quantum-Optical Devices Laboratory.

In an article recently published in “Nature Communications”, PhD students Mateusz Mazelanik and Adam Leszczynski, with Dr Michal Parniak show that the device can solve real-world problems, which can’t be worked out with standard processors; it can be used as part of a superresolution spectrometer.

“We squeeze out as much information as we can from individual photons, so the measurement becomes very efficient,” comments first author Mateusz Mazelanik.

The light that comes to us from different objects holds plenty of information, such as the matter from which these objects are made out of. This information is visible in the light spectrum (you can see the spectrum when light is dispersed in a prism).

Light that reaches us from a distant star tells us about the elements that the star is made out of (this is how we know what stars in other galaxies are made out of). When we pass light through a solution or a substance, we’re able to determine what it’s composed of, i.e. whether it contains toxins. The science of collecting and analysing this type of information is known as spectroscopy (also known as spectrometry). This scientific field is used by biologists, physicists, astronomers, chemists and medical doctors on a daily basis.

But there’s a significant limitation in spectroscopy, known as the Rayleigh limit, which states that the information from light can’t be obtained with infinite precision. Some of the signals of the spectrum, known as spectral lines, can be so similar that traditional optical spectrometers can’t differentiate between them.

“Our device and algorithm allow us to not only gather information from light more efficiently, but it could also improve “cramming” information into light,” says Dr Parniak. He notes that this idea could be used in telecommunications as well, where more efficient data storage and processing in light is becoming essential.

Although there have been efforts to circumvent the limits of spectroscopy, the researchers of the University of Warsaw demonstrated how to do this in a completely unconventional way – with the use of solutions from quantum information science. Because where classical physics can’t cope, quantum physics sometimes offers a whole spectrum of possibilities.

Physicists of the University of Warsaw have built a device that can achieve a high resolution in spectroscopy (15 kHz, or forty parts per trillion) by using a small amount of light from a particular object. “Our spectrometer beats the classical limit using 20 times less photons than the hypothetical traditional spectrometer,” says Mateusz Mazelanik, “But this is a remarkable achievement because a classical device with a similar resolution doesn’t actually exist.”

The processor, which was built at the University of Warsaw, uses a cloud of several billion cooled rubidium atoms placed in a vacuum field, in order to carry out calculations (the atoms are visible to the naked eye – in the photograph – a red dot in the violet glass chamber on the left side of the device).

If the atoms are placed in a magnetic field and illuminated with a laser, they can be controlled to perform particular logic operations, such as process information on the spectrum of light that they are illuminated with.

Quantum effects are used in the calculations, so calculations in the “cold atomic cloud” don’t  substitute conventional binary calculations, but add a new level of quality.

“We came up with the idea of how a quantum processor could be used to solve particular problems in spectroscopy,” says Dr Michal Parniak. And he emphasises that, up until this point, finding practical applications for quantum processors and designing devices like these with unique solutions in mind wasn’t at all obvious.

The Centre for Quantum Optical Technologies at the University of Warsaw (UW) is a unit of the International Research Agendas Programme of the Foundation for Polish Science. The unit is co-financed from EU resources, obtained from the European Regional Development Fund under the Smart Growth Operational Programme.

The seat of the unit is the Centre of New Technologies at the University of Warsaw. The unit conducts research on the use of quantum phenomena, such as quantum superposition or entanglement in optical technologies. These phenomena have potential applications in communications, where they can ensure the security of data transmission; in imaging, where they help to improve resolution; and in metrology to increase the accuracy of measurements. The Centre for Quantum Optical Technologies at the University of Warsaw is actively looking for opportunities to cooperate with external partners in order to use these research results in practice.

The website of the Centre for Quantum Optical Technologies, University of Warsaw.

Caption (Image1): Experimental setup with laser-cooled rubidium atoms, which process the quantum data in visible light (left). Experimental setup of the laser beam, which programs quantum operations carried out in light trapped inside the atoms (right). (Source: University of Warsaw)

Caption (Image2): The paper's first author (left) - Mateusz Mazelanik - and the manager of the Quantum Optical Devices Laboratory - Dr Michal Parniak - next to the quantum-memory-based processor for light. (Source: University of Warsaw)

A useful application for a quantum processor: The improvement of spectroscopy measurements

University of Warsaw, Faculty of Physics 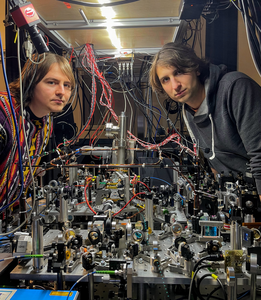