Researchers at Berkeley Lab are working with five other Department of Energy national labs to develop a roadmap for the Commonwealth of Puerto Rico to meet its 100% renewable energy mandate. A new Memorandum of Understanding, signed earlier this month between the Commonwealth and the federal government, kickstarts this “PR100 Study,” a two-year project funded by FEMA to conduct a comprehensive analysis of pathways for Puerto Rico to meet its clean energy goals, with an emphasis on power system reliability, resilience, and generation planning.

“The grid challenges of moving to 100% renewable energy are compounded in an island system that has to be electrically self-sufficient, relies on oil to generate 45% of their electricity at present, and has a utility currently in bankruptcy,” said Berkeley Lab researcher Peter Cappers, an expert in utility regulation and rate design. “These are the types of challenges that the DOE national labs have the experience and know-how to take on.”

Along with doing modeling and analysis of Puerto Rico’s energy needs and various scenarios for meeting those needs, the study will look at the economic impacts and factors associated with the different pathways.

Cappers noted, for example, that Puerto Rico has various options to meet its renewable energy generation requirements. “The most economically efficient pathway will likely be to build lots of big solar arrays and wind facilities connected to the bulk-system. But a hurricane can knock down transmission towers leaving large numbers of citizens without power, like it did after Hurricanes Maria and Irma in 2017. Alternatively, rooftop solar and storage units can directly provide a homeowner with electricity before and after a hurricane, but at considerably higher up-front cost,” he said. “I’m interested in understanding the economic differences in these different approaches and the tradeoffs that they entail.”

That is one example of the sort of questions that Berkeley Lab and its partners will be addressing in the PR100 study. Berkeley Lab will be leading the economic impact analysis, working with researchers from the National Renewable Energy Laboratory and Colorado State University.

DOE will hold a public informational webinar on February 16 at 12:00 PM Atlantic Time to offer additional details on the PR100 study. Visit this event page to learn more and register for the event.

What’s in a Name for a New Fungal Strain?

Space exploration has allowed humans to journey from earth to space – but humans may not be the only organisms hitching a ride by spacecraft. Microbiologists who study extreme environments are on the lookout for microorganisms present on spacecraft surfaces that could potentially contaminate the pristine environments of outer space. Now a new fungal strain has been discovered in a spacecraft assembly facility and named after a long-time Berkeley Lab microbiologist, Tamas Torok.

When new plant or animal species are discovered, they are often named after famous scientists, or even well-known public figures. This also happens when a new microorganism is discovered – in this case P. torokii, a novel fungal species of the genus Parengyodontium. Torok, Berkeley Lab affiliate scientist in the Climate and Ecosystems Earth Sciences Division, has decades of experience studying microbes in extreme environments, with a focus on the diversity and abundance of microorganisms in low biomass spacecraft assembly facilities, which are areas that control for microbes in preparation for materials to go into space.

“It’s a big honor,” Torok said. “Especially because I started my whole scientific career with fungal organisms. I worked with fungi for the first 18 years.”

The new fungal strain shows the ability to produce biofilm, which means it can attach to surfaces and survive cleaning protocols in the spacecraft assembly facility where it was discovered. The strain’s ability to survive in this low-nutrient environment is of concern because these cleanroom facilities must comply with NASA’s robotic mission requirements. Monitoring spacecraft bioburden – microbes present on the spacecraft or in the assembly facilities – is important so that scientists do not falsely claim extraterrestrial life has been discovered if contaminated spacecraft return microbes to earth. Scientists are aiming to develop more research and novel cleaning protocols to detect and limit the fungal strain’s potential for contamination in the spacecraft assembly facility.

MIT physicists and colleagues, including scientists from Berkeley Lab, have discovered the “secret sauce” behind the exotic properties of a new quantum material known as a kagome metal.

Kagome metals have long mystified scientists for their ability to exhibit collective behavior when cooled below room temperature.

One of the resulting properties is superconductivity, which allows a material to conduct electricity extremely efficiently.

In a regular metal, electrons behave much like people dancing individually in a room. In a kagome superconductor, when the material is cooled to 3 Kelvin (approximately minus 454 degrees Fahrenheit) the electrons begin to move in pairs, like couples at a dance.

At 100 Kelvin, the kagome material exhibits yet another strange kind of behavior known as charge density waves. In this case, the electrons arrange themselves in the shape of ripples.

A research team led by MIT assistant professor of physics Riccardo Comin discovered that the “secret sauce” behind kagome electrons’ unusual synchronicity is due to another behavior known as an electronic singularity, or the Van Hove singularity, which involves the relationship between the electrons’ energy and velocity. They reported their finding in the  January 13th online issue of the journal Nature Physics.

When many electrons exist at once with the same energy in a material, they are known to interact much more strongly. As a result of these interactions in the presence of this singularity, the electrons can pair up and become superconducting or form charge density waves.

Comin noted that relating the energy to the velocity of electrons in a solid is challenging and required special instruments at two international synchrotron research facilities: Beamline 4A1 of the Pohang Light Source, and Beamline 7.0.2 (MAESTRO) of Berkeley Lab’s Advanced Light Source (ALS). A synchrotron is a particle accelerator that generates extremely bright beams of light ranging in photon energies from the infrared through X-rays.

With assistance from ALS staff scientist Chris Jozwiak, the team used a technique called Angle-resolved Photoemission Spectroscopy, or ARPES, which utilizes very bright, monochromatic X-ray light focused into a small beam just 10 micrometers (or 10 thousandths of a meter) wide. The technique allowed the team to accurately identify and measure the velocities of the electrons central to the interesting properties of the material.

“You need a large light-source user facility like the ALS to do these kinds of sophisticated experiments with new materials. The MAESTRO beamline at the ALS offers a very precise and bright source of photons that can be tuned to a wide range of wavelengths, or energies. If our doors weren’t open to the public, work such as this exciting discovery by the Comin group wouldn’t be possible,” Jozwiak said. 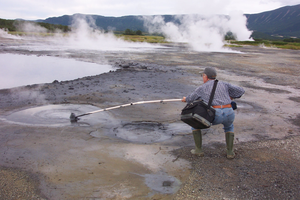