An astounding new species of orchid has been discovered in the cloud rainforest of Northern Ecuador. Scientifically named Maxillaria anacatalina-portillae, the plant - unique with its showy, intense yellow flowers - was described by Polish orchidologists in collaboration with an Ecuadorian company operating in orchid research, cultivation and supply.

Known from a restricted area in the province of Carchi, the orchid is presumed to be a critically endangered species, as its rare populations already experience the ill-effects of climate change and human activity. The discovery was aided by a local commercial nursery, which was already cultivating these orchids. The study is published in the open-access journal PhytoKeys.

During the past few years, scientists from the University of Gdańsk (Poland) have been working intensely on the classification and species delimitations within the Neotropical genus Maxillaria – one of the biggest in the orchid family. They have investigated materials deposited in most of the world’s herbarium collections across Europe and the Americas, and conducted several field trips in South America in the search of the astonishing plants.

The first specimens of what was to become known as the new to science Maxillaria anacatalina-portillae were collected by Alex Portilla, photographer and sales manager at Ecuagenera, an Ecuadorian company dedicated to orchid research, cultivation and supply, on 11th November 2003 in Maldonado, Carchi Province (northern Ecuador). There, he photographed the orchid in its natural habitat and then brought it to the greenhouses of his company for cultivation. Later, its offspring was offered at the commercial market under the name of a different species of the same genus: Maxillaria sanderiana ‘xanthina’ (‘xanthina’ in Latin means ‘yellow’ or ‘red-yellow’).

In the meantime, Prof. Dariusz L. Szlachetko and Dr. Monika M. Lipińska would encounter the same intriguing plants with uniquely colored flowers on several different occasions. Suspecting that they may be facing an undescribed taxon, they joined efforts with Dr. Natalia Olędrzyńska and Aidar A. Sumbembayev, to conduct additional morphological and phylogenetic analyses, using samples from both commercial and hobby growers, as well as crucial plants purchased from Ecuagenera that were later cultivated in the greenhouses of the University of Gdańsk.

As their study confirmed that the orchid was indeed a previously unknown species, the scientists honored the original discoverer of the astonishing plant by naming it after his daughter: Ana Catalina Portilla Schröder.

Еndangered, new to science orchid discovered in Ecuador with the help of a commercial nursery 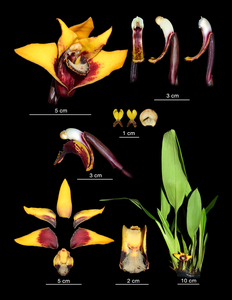 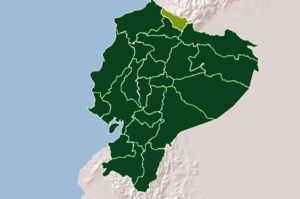 Location of the Carchi province (Ecuador)