Biology — Beneath the skin

Jacobson said the study presented an opportunity to use a new explainable-AI based method on real-world health-related datasets on ORNL’s Summit supercomputer. They analyzed UPenn’s skin cell data from mice, plus publicly available human tissue data, with a machine learning technique to compare gene expression through hundreds of millions of possibilities and identified gene expression patterns seemingly responsible for inflammation early in the disease’s progression.

“Our goal is to further refine these studies and extend them,” said Seykora. “By teaming with ORNL we found new genes and cells that may be therapeutic targets for treatment,” said Graves.

Caption: Genetic analysis revealed connections between inflammatory activity and development of atomic dermatitis, according to researchers from the University of Pennsylvania School of Medicine, the Perelman School of Medicine, and Oak Ridge National Laboratory. Credit: Kang Ko/UPenn

Textile engineering researchers from North Carolina State University used neutrons at Oak Ridge National Laboratory to identify a special wicking mechanism in a type of cotton yarn that allows the fibers to control the flow of liquid across certain strands.

The yarn is coated with chitosan, a compound derived from the shells of crabs, shrimp and lobsters that is commonly used in biomedical applications. It’s also coated with a catalase enzyme that extracts hydrogen and oxygen from hydrogen peroxide.

“Wicking tests typically introduce dye to track water, but sometimes the dye can compromise water movement. Because neutrons are highly sensitive to hydrogen, they can track water wicking directly, which is a significant benefit to experimental research,” said ORNL’s Yuxuan Zhang.

The published research could provide valuable insights into optimizing the fabric further for use in small- and large-scale industrial applications such as chemical processing and novel filtration systems.

Caption: Neutron computed tomography reveals how water is constrained to travel only along certain strands of a special yarn coated with a water-wicking compound and a biocatalytic enzyme. Credit: Yuxuan Zhang/ORNL, U.S. Dept. of Energy

The team developed a living model of a water treatment process fed by real-world data. The simulation detects and compensates for factors such as sensor fouling, changes in water sources and equipment outages. Results of a pilot-scale demonstration on a closed-circuit reverse osmosis desalination system showed improvements in energy efficiency and waste stream reduction ranging from 8% to 12%.

“The models we’re building allow us to try out new control approaches in a realistic simulation before installing them on a full-scale system,” said ORNL’s Kris Villez.

The goal of the research, which is part of the DOE National Alliance for Water Innovation, is to support a fully autonomous, decentralized and unstaffed water treatment system that could be easily deployed in remote communities or industrial sites.

“Our aim is to explore the impact of harsh orbital environments on new classes of quantum materials,” said ORNL’s Zac Ward.

Four materials had the right stuff for the study. Gold will reveal how fast energetic ions etch a surface. An oxide crystal with many different randomly distributed atoms will show if inherent disorder can protect a material’s functional properties. An insulator with topologically protected conducting surface states will test the robustness of this protection from cosmic damage. And an antiferromagnet will indicate how electron spin alignment is influenced in space.

Launched in August 2021, the materials will be monitored in situ and retrieved this fall for postmortem characterization at ORNL.

Caption: Samples of four unique materials hitched a ride to space as part of an effort by ORNL scientists to evaluate how each fares under space conditions. Credit: Zac Ward/ORNL, U.S. Dept. of Energy

The team built a prototype furnace that incorporates monolithic acidic gas reduction, or AGR, as the catalyst to minimize acidic gases and condensate acidity, and oxidize carbon monoxide, hydrocarbons and methane.

In a demonstration, researchers conducted a 400-hour reliability and durability test and proved that AGR, made of titanium dioxide, copper oxide and minor platinum, removed more than 99.9% of the acidic gas products produced during combustion. It trapped and removed sulfur oxides and reduced additional emissions.

“AGR functions like a catalytic converter in a car, passing the exhaust over metals to reduce acidic gases and other pollutant emissions that contribute to global climate change,” ORNL’s Zhiming Gao said. “This technology could be applied to commercial rooftop units, thermally driven heat pumps, gas-fired water heaters and boilers.” 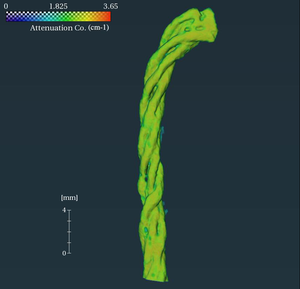 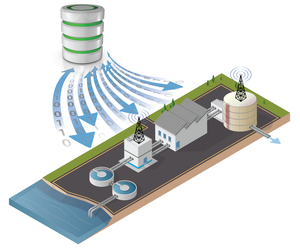 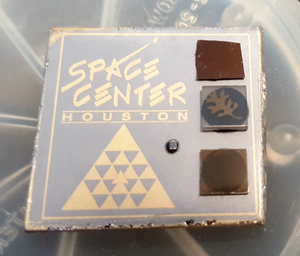 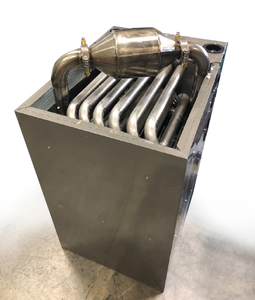