Recent years have witnessed rapid development of the infrared photoelectric technology and the growth-up of the format of focal plane array, integration methods, as well as the spectral regime, and has widely implemented in fields including environmental resources exploration, military defenses, space science, and in the near future the field of artificial interconnect of things (AIoT) bench for communication and sensing of all things. However, with the diversity of the environment and the complexity of the features of hidden targets, the short-wave infrared detection is disturbed by the varying environmental conditions. Expanding the wavelength range of infrared detection to cover the electromagnetic spectrum from 30 μm to 3000 μm is of great significance for upgrading the capacity of optoelectronic system, such as all-weather monitoring, target recognition in complex conditions, remote sensing and spectroscopy, as well as security-screening. Existing infrared detection materials and devices are limited by intrinsic dark current and operating temperature, which mainly work in the wavelength below 20 μm under stringent cooling condition, and confront huge-challenges in wavelength extension in terms of refrigeration, power consumption, bulky, and difficulty in high-quality material growth. Therefore, there is an urgent requirement to explore novel materials and device structure beyond traditional routes to meet miniaturized technologies development with room temperature working capability, low-power consumption, and long-wavelength detection.

In a new paper published in Light Science & Application, a team of scientists, led by Professor Lin Wang from State Key Laboratory for Infrared Physics, Shanghai Institute of Technical Physics, Chinese Academy of Sciences, China, and co-workers have explored a topological semimetal-based photodetector for effectively capturing low-energy photons. Combining multiple detection mechanisms, they developed a hybrid Dirac semimetal photodetector with strong interaction at deep-subwavelength regime of ultrashort-channel and efficient photon-conversion led by symmetry engineering. The superior low-energy band topology of Dirac semimetal and peculiar non-equilibrium manipulation, enable the rectification of terahertz signals in the nanometric regime at room temperature. It is worth mentioning that the device possesses excellent environmental stability, and the photocurrent is efficiently generated across wide spectral regime beyond traditional optical technique. The reported method and technique will open up new possibilities for the facile realization of portable room-temperature low-photon detectors with high sensitivity, fast operation, and low NEP, which have significant advantages over the existing technologies.

The detector integrates PtSe2-class type-II Dirac semimetal as the channel material, and is fully optimized in terms of antenna structure, heterogeneous integration, and unbalanced electrodes. It has excellent detection performance for low-energy photons at room temperature, with responsivity exceeding ∼0.2 A/W and noise-equivalent power (NEP) less than ~38 pW/Hz0.5, as well as superb ambient stability. These scientists summarize the operational principle of their photodetector:

“We provide an alternative photodetecion strategy by efficiently integrating and manipulating at the nanoscale the optoelectronic properties of topological Dirac semimetal PtSe2 and its van der Waals heterostructures, based on the following three principles: (1) Our discovery reveals the achieve stronger light-matter interaction beyond the skin depth regime, which is achieved by titled self-aligned technique; (2) Spontaneous photocurrent is versatile manipulated by breaking the the symmetry of the in-plane barrier, so that the carriers can flow in one direction; (3) To suppress the dark current and achieve room temperature rectification, a PtSe2-graphene heterojunction was constructed benefiting from congenital nature of the van der Waals interaction.” Said Prof. Wang, the first author of the work.

“The asymmetrical electrodes forming the nanoscale photoactive region can funnel efficiently the low-energy photons and enable intensive field enhancement, giving rise to a Seebeck electromotive force and a preferential flow of nonequilibrium hot carriers. The maximum responsivity can reach 0.2A/W at zero bias.” they added.

“Considering the superior ambient stability and the excellent potential for scalable synthesis of PtSe2, our work opens new possibilities for the facile realization of portable room-temperature, low-photon detectors, with high sensitivity, fast operation, and low NEP, with great advantages compared to current technologies. It is expected to break through the bottleneck of traditional low-energy photon detection.” the scientists forecast.

Lightening up the nanoscale long-wavelength optoelectronics 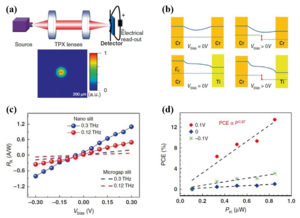 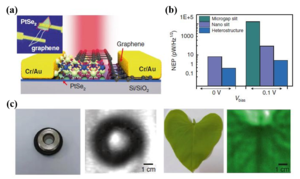