Migratory birds are declining globally because of the way that humans have modified the landscape over recent decades – according to new research from the University of East Anglia.

The research team hope their work will help inform how best to target conservation efforts.

Dr James Gilroy, from UEA’s School of Environmental Sciences, said: “We know that migratory birds are in greater decline than non-migratory species, but it’s not clear why.

“We wanted to find out where in their life cycles these migratory species are most exposed to human impacts.”

The research team identified 16 human-induced threats to migratory birds, including infrastructure associated with bird disturbance and collisions, conversion of land from natural habitat to human land use, and climate change.

Advances in satellite imagery allowed the team to map each of the 16 threats across Europe, Africa and Western Asia. The team also created the first ever large-scale map of hunting pressure across the region.

A total of 103 species of migrating birds were studied, including many rapidly declining species like the Turtle Dove and the Common Cuckoo, using large-scale datasets.

The team calculated ‘threat scores’ for factors such as habitat loss and climate change, across breeding locations, as well as non-breeding ranges.

They then explored the relationships between these threat scores and bird population trends calculated from 1985 to 2018 by the Pan-European Common Bird Monitoring Scheme (PECBMS).

Dr C,laire Buchan from UEA’s School of Biological Sciences, said: “We found that human modification of the landscape in the birds’ distribution ranges in Europe, Africa and Western Asia is associated with declining numbers of over 100 Afro-Eurasian migratory birds.

“When we talk about modification of the landscape, we mean things like roads, buildings, powerlines, wind turbines – anything that isn’t naturally there.

“One of the biggest impacts seems to be caused by things that would kill a bird outright – for example flying into a wind turbine, a building, being electrocuted on a powerline, hit by a vehicle or hunted. We found that exposure to these human-induced ‘direct mortality’ threats in the bird’s wintering ranges are reflected in population decreases in breeding birds.”

Dr Aldina Franco, also from UEA’s School of Environmental Sciences, said: “Our findings are important because we need to understand where declining species are being most impacted by humans across their seasonal migrations. Pinpointing where birds are most exposed to these threats could help us target conservation actions.”

Researchers working on this project have received funding from the Natural Environment Research Council (NERC), the European Commission and the Portuguese Foundation for Science and Technology. 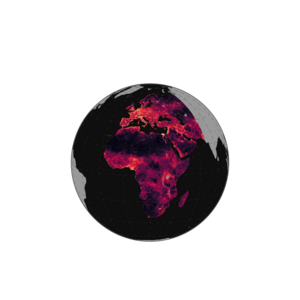 Levels of direct mortality threat intensity across the studied region.