Osaka, Japan – Humans have long been known to sympathize with the machines or computer representations they operate. Whether driving a car or directing a video game avatar, people are more likely to identify with something that they perceive to be in control of. However, it remains unknown how the attitudes represented in the autonomous behavior of the robots affects their operators. Now, researchers from Japan have found that when a person controls only a part of the body of a semi-autonomous robot, they are influenced by the robot’s expressed “attitudes.”

Researchers at the Department of Systems Innovation at Osaka University tested the psychological impact of remotely operating certain semi-autonomous robots on humans. These “telepresence” robots are designed to transmit the human voice and mannerisms as a way of alleviating labor shortages and minimizing commuting costs. For example, a human operator may control the voice, while the body movements are handled automatically by a computer. “Semi-autonomous robots have shown potential for practical applications in which a robot’s autonomous actions and human teleoperation are jointly used to accomplish difficult tasks. A system that combines the ‘intentions’ of different agents, such as an algorithm and a human user, that are collectively used to operate a single robot is called collaborative control,” first author Tomonori Kubota says.

In the experiment, the team investigated whether the attitude of the teleoperator would align more with that expressed by the semi-autonomous robot when they controlled a part of the robot’s body. Beforehand, experimental participants were asked to rank a set of 10 paintings. They were then assigned to one of three conditions for controlling a human-like robot. Either they operated the robot’s hand movement, ability to smile, or did not control the robot at all. They were then shown the android speaking to another participant who was actually collaborating with the experimenters. The android recommended the painting that had been ranked sixth, and the experimenters recorded how much this influenced the robot operator’s subsequent ranking of that painting. “This study reveals that when a person operates a part of the body of an android robot that autonomously interacts with a human, the person's attitudes come to closely align with the robot’s attitudes,” senior author Hiroshi Ishiguro says.

This research indicates that in future implementations of “human-robot collaborations,” designers need to be mindful of the ways operators may be influenced by their role with subconscious changes in attitude.

Osaka University was founded in 1931 as one of the seven imperial universities of Japan and is now one of Japan's leading comprehensive universities with a broad disciplinary spectrum. This strength is coupled with a singular drive for innovation that extends throughout the scientific process, from fundamental research to the creation of applied technology with positive economic impacts. Its commitment to innovation has been recognized in Japan and around the world, being named Japan's most innovative university in 2015 (Reuters 2015 Top 100) and one of the most innovative institutions in the world in 2017 (Innovative Universities and the Nature Index Innovation 2017). Now, Osaka University is leveraging its role as a Designated National University Corporation selected by the Ministry of Education, Culture, Sports, Science and Technology to contribute to innovation for human welfare, sustainable development of society, and social transformation. 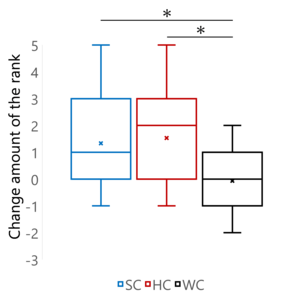