Zinnia (popular ornamental flowers) and tobacco adapt to copper in the soil. They accumulate heavy metal in the roots and limit the transport of copper to the aerial parts of the plant: stem, leaves, and beyond. At the same time, plants not only survive in difficult conditions, but also grow better. This feature was revealed by scientists of the Ural Federal University (UrFU). They conducted experiments, the results of which are published in the journal Horticulturae.

“Plants of the Asteraceae and Nightshade families, namely zinnia and tobacco, are copper-exclusive, their root system performs the function of copper accumulation,” says Anastasia Tugbaeva, junior researcher at the laboratory "Biotechnologies for maintaining and restoring components of natural and transformed biosystems", UrFU. “Using zinnia as an example, we have shown for the first time that it can grow in copper-contaminated soils and even flower faster than in pure soils. That is, it can be used for landscaping areas, it will grow well. Tobacco, an important agricultural crop and useful fertilizer, also adapted to long-term exposure to copper in our experiments and grew comparable to control plants, despite the high content of copper in the substrate.”

The experiments were carried out under conditions close to real. Scientists recreated the conditions of humidity and temperature levels, tested the effect of various concentrations of copper sulfate on plant growth and a number of physiological and biochemical characteristics.

“We conducted experiments for 20, 40, 60 days and used substrates in which the content of copper could even exceed its content in urban soils,” says Anastasia Tugbaeva. “Under the influence of copper in the root and stem of plants, the expression of five genes responsible for the synthesis of phenolic compounds and lignin is enhanced. Lignin is one of the components of the plant cell wall, which makes it stronger. It is lignin that is the mechanism of plant adaptation, which limits the transfer of metals from the cell wall and the effects of metals on the intracellular structure of the plant.”

The Urals, large cities, are characterized by a high level of copper content in soils. Contaminated soil is a danger not only from the point of view of toxic substances entering the human body with food, it is also a source of secondary pollution of the surface air layer. The presence of heavy metals in the soil leads to the alienation of agricultural land, a decrease in crop yields and productivity of plants, therefore, much attention is paid to observations of urban soil pollution.

Polluted land can be planted with flowers and tobacco 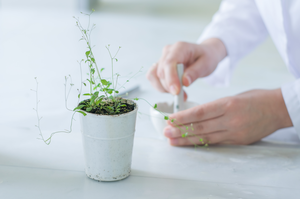