After more than three and a half years of project, Madrid Flight On Chip (MFoC) successfully culminates providing an important milestone for the implementation of advanced technological products and introduces disruptive changes in the design and verification of complex space systems. The researchers, engineers and technicians of the consortium organizations have positioned Madrid at the forefront of the "New Space" phenomenon in which technological innovation has enabled significant cost reductions leading to the provision of new products.

The Madrid Flight on Chip (MFOC) project was born in early 2019, as an action co-financed by the Madrid Regional Government and the European Union funds, ERDF. Generating a technological development based on Multi-Processor System on Chip (MPSoC) components was the maxim of the project, whose main objective was the validation of this technology and its potential advantages over other classical solutions, for use in space equipment and avionics.

SENER Aerospace carried out system engineering, architecture, implementation and integration tasks, as well as validation and verification of the results obtained; IMDEA Software was responsible for the preparation of a report about the state of the art and practice, and for the "MAZACOTE" tool; UC3M for the software architectures, the reliability solution, communications and the "university satellite" application; REUSE for the system engineering environment and life cycle management; and Centrum, Genera and MARM for the design and implementation of software modules and FPGAs.

The IMDEA Software Institute’s team, formed by the researchers Alessandra Gorla, José F. Morales, Fernando Macías, Daniel Jurjo and Juan F. García, has fulfilled the individual objectives set by the project, which consisted of investigating the state of the art on the technical and practical side -including both research articles and industrial tools and solutions-, as well as creating a prototype tool to generate tests automatically. Both objectives are aimed at meeting the need to substantially reduce the costs of the testing phase in the production of satellites.

The end of MFOC, with the consequent technology development, has represented a major advance in small satellite processing technology over existing capabilities. Furthermore, the climate of collaboration that has been generated between the members of the Consortium during the duration of the project is intended to be sustained over time by combining and increasing the capabilities that each of these entities has separately, making Madrid an area of technological excellence in Southern Europe. 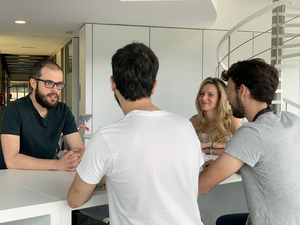