E. O. Wilson once referred to invertebrates as “the little things that run the world,” without whom “the human species [wouldn’t] last more than a few months.” Although small, invertebrates have an outsized influence on their environments, pollinating plants, breaking down organic matter and speeding up nutrient cycling. And what they lack in stature, they make up for in diversity. With more than one million known species, insects alone vastly outnumber all other invertebrates and vertebrates combined.

Despite their importance and ubiquity, some of the most basic information about invertebrates, such as where they’re most diverse and how many of them there are, still remains a mystery. This is especially problematic for conservation scientists trying to stave off global insect declines; you can’t conserve something if you don’t know where to look for it.

In a new study published this Wednesday in the journal Science Advances, researchers used ants as a proxy to help close major knowledge gaps and hopefully begin reversing these declines. Working for more than a decade, researchers from institutions around the world stitched together nearly one-and-a-half million location records from research publications, online databases, museums and scientific field work. They used those records to help produce the largest global map of insect diversity ever created, which they hope will be used to direct future conservation efforts.

“This is a massive undertaking for a group known to be a critical ecosystem engineer,” said co-author Robert Guralnick, curator of biodiversity informatics at the Florida Museum of Natural History. “It represents an enormous effort not only among all the co-authors but the many naturalists who have contributed knowledge about distributions of ants across the globe.”

Creating a map large enough to account for the entirety of ant biodiversity presented several logistical challenges. All currently known ant species were included, which numbered at more than 14,000, and each one varied dramatically in the amount of data available.

The majority of the records used contained a description of the location where an ant was collected or spotted but did not always have the precise coordinates needed for mapping. Inferring the extent of an ant’s range from incomplete records required some clever data wrangling.

Co-author Kenneth Dudley, a research technician with the Okinawa Institute of Science and Technology   built a computational workflow to estimate the coordinates from the available data, which also checked the data for errors. This allowed the researchers to make different range estimates for each species of ant depending on how much data was available. For species with less data, they constructed shapes surrounding the data points. For species with more data, the researchers predicted the distribution of each species using statistical models that they tuned to reduce as much noise as possible.

The researchers brought these estimates together to form a global map, divided into a grid of 20 km by 20 km squares, that showed an estimate of the number of ant species per square (called the species richness). They also created a map that showed the number of ant species with very small ranges per square (called the species rarity). In general, species with small ranges are particularly vulnerable to environmental changes.

However, there was another problem to overcome—sampling bias.

“Some areas of the world that we expected to be centers of diversity were not showing up on our map, but ants in these regions were not well-studied,” explained co-first author Jamie Kass, a postdoctoral fellow at the Okinawa Institute of Science and Technology. “Other areas were extremely well-sampled, for example parts of the USA and Europe, and this difference in sampling can impact our estimates of global diversity.”

So, the researchers utilized machine learning to predict how their diversity would change if they sampled all areas around the world equally, and in doing so, identified areas where they estimate many unknown, unsampled species exist.

“This gives us a kind of ‘treasure map,’ which can guide us to where we should explore next and look for new species with restricted ranges,” said senior author Evan Economo, a professor at the Okinawa Institute of Science and Technology.

When the researchers compared the rarity and richness of ant distributions to the comparatively well-studied amphibians, birds, mammals and reptiles, they found that ants were about as different from these vertebrate groups as the vertebrate groups were from each other.

This was unexpected given that ants are evolutionarily highly distant from vertebrates, and it suggests that priority areas for vertebrate diversity may also have a high diversity of invertebrate species. The authors caution, however, that ant biodiversity patterns have unique features. For example, the Mediterranean and East Asia show up as diversity centers for ants more than the vertebrates.

Finally, the researchers looked at how well-protected these areas of high ant diversity are. They found that it was a low percentage—only 15% of the top 10% of ant rarity centers had some sort of legal protection, such as a national park or reserve, which is less than existing protection for vertebrates.

“Clearly, we have a lot of work to do to protect these critical areas,” Economo concluded.

The global distribution of known and undiscovered ant biodiversity 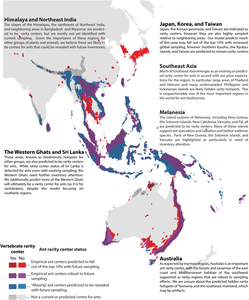 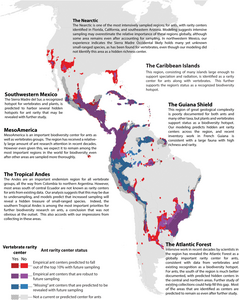