SAN FRANCISCO, CA (August 15, 2022) — California now has two new scorpions on its list of species, thanks to the efforts of two keen-eyed high school students from the Bay Area and the California Academy of Sciences. Harper Forbes and Prakrit Jain, avid users on the community science platform iNaturalist, discovered the new-to-science scorpions while trawling the thousands of observations uploaded by other users in the state. New species Paruroctonus soda and Paruroctonus conclusus are playa scorpions, meaning they can only be found around dry lake beds, or playas, from the deserts of Central and Southern California. For scientists, conservation managers, and the growing communities of wildlife observers on platforms like iNaturalist, these newly described species provide a better understanding of California’s biodiversity and the places most in need of protection—a cornerstone of the Academy’s Thriving California initiative. The budding naturalists collaborated with Curator of Arachnology  Lauren Esposito, PhD, to formally describe the species in a study published today in ZooKeys.

In 2019, Forbes and Jain came across an unknown scorpion species on iNaturalist observed near Koehn Lake—an ephemeral lake in the Mojave Desert—that had remained unidentified since it was uploaded six years earlier.

“We weren’t entirely sure what we were looking at,” Jain says. “Over the next couple years, we studied scorpions in the genus Paruroctonus and learned they frequently evolve to live in alkali playas like Koehn Lake. When we returned to that initial observation, we realized we were looking at an undescribed Paruroctonus species.”

Serendipitously, another unknown scorpion observed in San Luis Obispo County was uploaded to iNaturalist shortly after their discovery in May of 2021. With a few years of arachnid research under their belts, Forbes and Jain knew right away that it was a new species in the same genus. They immediately contacted Esposito to assist, resulting in two new-to-science scorpions—P. soda and P. conclusus—and a published paper in which Forbes and Jain are first authors.

“Harper and Prakrit went through all the steps to formally describe a species, sampling the populations and comparing them with existing specimens in our collection,” Esposito says. “There’s a lot of work involved, but they are incredibly passionate about this research. It’s inspiring to see that their hobby is one that advances biodiversity science.”

P. soda and P. conclusus are both alkali sink specialists, meaning they have adapted to the alkaline basins—dry, salty playas with high pH soils—in which they evolved. Each species has a very limited range and can only be found in the playas where they were discovered: Soda Lake (the former’s namesake) and Koehn Lake. During their summer break, Forbes and Jain visited the lakes to collect specimens of each new species. After scouting the alkali flats during the daytime for habitats most suited for playa scorpions, they set out with their vials and forceps at dusk, as these desert dwellers are primarily active at night. Luckily, most scorpions fluoresce under ultraviolet light, so the researchers used blacklights to scour the open playas while keeping an eye out for their glowing subjects. They also searched the scorpions’ typical hiding places, peering into cracks in the hard clay soil and combing through common alkali sink plants like iodine bush (Allenrolfea occidentalis) and bush seepweed (Suaeda nigra). At the end of each trip, they successfully collected a sample size of both males and females sufficient for the study.

While the species range for P. soda is small (just a few square miles), it is entirely located within Carrizo Plain National Monument—federally protected land that renders this species safe from human-driven threats. Unfortunately, this is not the case for P. conclusus.

“While no official assessment has been carried out for either species, P. conclusus can only be found on a narrow strip of unprotected land, less than two kilometers long and only a few meters wide in some places,” Forbes says. “The entire species could be wiped out with the construction of a single solar farm, mine, or housing development.”

Though P. soda seems to be relatively safe compared to P. conclusus, the constant threat of climate change endangers all wildlife, particularly in delicate desert environments. As part of the Thriving California initiative, Academy scientists hope to collaborate with schools and communities throughout the state to conduct further biodiversity research. By harnessing scientific data—including crowd-sourced data from iNaturalist—and providing access to environmental and science learning, the initiative hopes to halt biodiversity loss in the Golden State.

Now high school graduates, this fall Forbes will study evolutionary biology at the University of Arizona and Jain will study integrative biology at the University of California, Berkeley. They will continue their work with Esposito and are currently collaborating on their next major project: a holistic book of California’s scorpions. In addition to their research and academic endeavors, they are excited to get back out in the field to find, collect, and identify more scorpions.

“I will never get tired of going out at night to find a certain scorpion for the first time,” Jain says. “Whether it be solving the mystery of a long-lost scorpion or discovering something new in an unexpected place, a trip to the desert is always a challenge and an adventure.”

About the California Academy of Sciences
The California Academy of Sciences is a renowned scientific and educational institution with a mission to regenerate the natural world through science, learning, and collaboration. Based in San Francisco’s Golden Gate Park, it is home to a world-class aquarium, planetarium, and natural history museum, as well as innovative programs in biodiversity science, environmental learning, and collaborative engagement—all under one living roof. Museum hours are 9:30 am – 5:00 pm Monday – Saturday, and 11:00 am – 5:00 pm on Sunday. Admission includes all exhibits, programs, and shows. For daily ticket prices, please visit www.calacademy.org or call (415) 379-8000 for more information.

About Research at the California Academy of Sciences
The Institute for Biodiversity Science and Sustainability at the California Academy of Sciences is at the forefront of efforts to regenerate the natural world through science, learning, and collaboration. Based in San Francisco, the Institute is home to more than 100 world-class scientists, state-of-the-art facilities, and nearly 46 million scientific specimens from around the world. The Institute also leverages the expertise and efforts of more than 100 international Associates and 450 distinguished Fellows. Through expeditions around the globe, investigations in the lab, and analysis of vast biological datasets, the Institute’s scientists work to understand the evolution and interconnectedness of organisms and ecosystems, the threats they face around the world, and the most effective strategies for ensuring they thrive into the future. Through deeply collaborative partnerships and innovative public engagement initiatives, they also guide critical conservation decisions worldwide, inspire and mentor the next generation of scientists, and foster responsible stewardship of our planet. 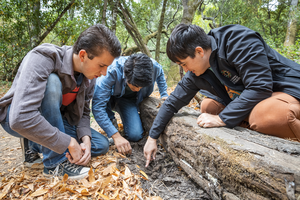 Researchers searching for scorpions in the field 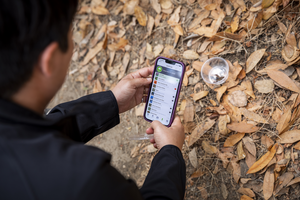