As industries across the country begin the transition to renewable energy, the demand for batteries, and therefore lithium, is projected to rise dramatically. But, with much of the global lithium supply located outside of the United States, researchers are looking for new techniques to extract it from local, if somewhat unconventional, sources such as petroleum wastewater and geothermal brines.

One of the most promising of these extraction techniques is electrochemical intercalation, a process in which electrodes draw lithium from otherwise unusable water. Until recently, the technology had not reached the desired level of Li selectivity for extremely dilute water resources.

Now, researchers at the University of Chicago’s Pritzker School of Molecular Engineering (PME) have shown that “seeding” electrodes with lithium ions can help increase the host’s lithium selectivity and repel unwanted elements. Their findings were published in Nature Communications.

A material distinction
In chemistry, intercalation is the process by which “guest” ions are drawn into and stored within a “host” material, the latter acting as a sort of molecular beehive. The process is also reversible, meaning those same ions can be extracted and the process repeated over and over. It is the key mechanism behind rechargeable batteries.

When used for lithium extraction, electrochemical intercalation relies on a host material—in this case, olivine iron phosphate (a type of crystal)—that is especially well suited to attract and store lithium ions. While widely studied and one of the best-suited materials for the job, olivine iron phosphate is far from perfect. Competing ions are often drawn into the host material along with lithium, elements such as sodium, which reduce the system’s effectiveness.

Liu and her team wanted to understand what drove those co-intercalations and what happened once the two ions were stored within the crystal.

Working with researchers at the University of Illinois Urbana-Champaign, Liu and her team used transmission electron microscopy to look inside their host material. They found that lithium and sodium tended to separate when given the chance. This suggested that lithium and sodium ions repelled each other inside the crystal material, much in the same way that oil and water separate when mixed, a process called phase separation.

To confirm that behavior, the team developed computational models in collaboration with researchers at the Illinois Institute of Technology.

“It was remarkable to see these ions phase separate into two different domains where one domain was only lithium and one was only sodium,” Liu said. “It made us wonder how we could use it to boost lithium selectivity.”

Sowing the seeds of inquiry
Acting on their findings, Liu and her team devised a system to pre-seed their olivine host with lithium. They theorized this would increase the energy barrier for sodium ions, making it more difficult for unwanted elements to enter the host.

They found that seeding 20 to 40 percent of the overall host materials’ storage sites can in crease the selectivity to 1.6-fold and 3.8-fold, respectively. The seeded high-Li solid solution phases showed a strong correlation to the selectivity enhancement.

“We’ve demonstrated an effective way of manipulating the kinetic pathway in a host material,” Liu said. “If you can control the lithium-sodium pathway, you have a powerful lever for influencing lithium selectivity. That realization opens a door for more study and, ultimately, a sustainable system for extracting lithium.”

Defining the challenges of Li extraction with olivine host: The roles of competitor and spectator ions 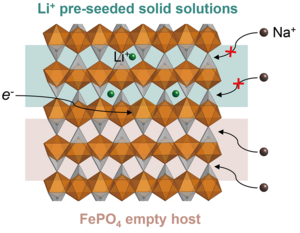