This study is led by Dr. Keping Ma and Dr. Yu Liang (Institute of Botany, Chinese Academy of Sciences). An important mechanism promoting species coexistence is conspecific negative density dependence (CNDD), which inhibits conspecific neighbors by accumulating host-specific enemies near adult trees and thus promoting species coexistence by freeing up space for heterospecific species. Natural enemies may be genotype-specific. Whether within-species genetic relatedness between seedlings and adult neighbours regulates the strength of CNDD is one of the keys explaining the mechanism of species coexistence. However, this remains largely unexplored in natural forests due to the difficulty in assessing the parent-offspring relationship between individuals within natural populations.

Recently, a study from Dr. Keping Ma group, Institute of Botany, Chinese Academy of Sciences was conducted in a 24-ha subtropical evergreen broad-leaved forest dynamics plot. Totally 3002 individuals of the most dominant tree species Castanopsis eyrei were sampled and 12 microsatellite markers were used to identify the parent-offspring relationship to estimate the effects of adult-seedling genetic relatedness on seedling recruitment.

Overall, the results indicate that the strength of CNDD and population dynamics depend on both genetic relatedness and spatial distance to conspecific adults, implying genotype-specific natural enemies may be a key driver. Further research on the interaction between genotype-specific enemies and their host plants is essential to fully understand the underlying mechanisms of CNDD. 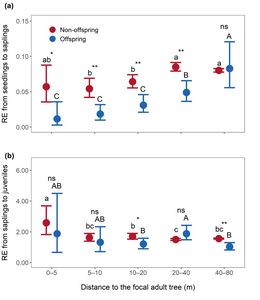