Topological magnetoelectric effect (TME), for example, the topological response of magnetization to an electric field in the same direction, is a hallmark phenomenon of axion insulator from the topological field theory. Recently, although series of antiferromagnetic materials were experimentally classified as axion insulator, TME has yet to been observed. The key challenge is that all the surface magnetic gaps should have the same sign, which requires complex surface magnetic configuration.

Researchers have shown that, by designing in a triangular prism geometry, ferromagnetic axion insulators can generate surface Hall circulating current and TME with an external electric field applied. Compared with the previous proposals, the ferromagnetic order is easy to achieve, especially in the well-known intrinsic magnetic topological insulator such as MnBi2Te4 family. By using the linear response theory, researchers obtained a nearly quantized topological magnetoelectric response coefficient in ferromagnetic MnBi2Te4 of axion insulator phase, indicating that the system is an ideal platform to realize TME. This work provides a new avenue for experimentally realization of TME. 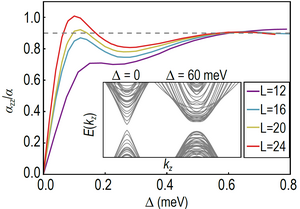