Williams-Beuren syndrome (WBS) is a rare disorder that causes neurocognitive and developmental deficits. However, musical and auditory abilities are preserved or even enhanced in WBS patients. Scientists at St. Jude Children’s Research Hospital have identified the mechanism responsible for this ability in models of the disease. The findings were published today in Cell.

Understanding what causes the superior auditory ability in WBS patients may provide a target for treating the disease in addition to helping advance research on the ability to discriminate between sounds. WBS offers insight into the mechanisms that underlie enhanced auditory abilities. For instance, some people with WBS have perfect pitch, which is the ability to differentiate between notes or frequencies without a reference guide.

“WBS stands out among neurodevelopmental disorders because children with the disorder, despite profound learning disabilities, can have a higher prevalence of superior musical and linguistic abilities than children in the general population,” said corresponding author Stanislav Zakharenko, M.D., Ph.D., St. Jude Department of Developmental Neurobiology. “We were fascinated by that and wanted to know more about how a disorder that is caused by a loss of 27 genes could help individuals gain a better than normal ability for auditory processing.”

Excited neurons in the auditory cortex

Mouse models of WBS have an enhanced ability to discriminate between sound frequencies. These mice also have improved frequency coding in the auditory cortex, the part of the brain that processes sound. The researchers showed that the enhanced ability to discriminate between frequencies is caused by hyperexcitable interneurons in the auditory cortex.

To understand the cellular biology that underlies enhanced auditory abilities in WBS patients, the researchers conducted an RNAseq experiment. The data led the researchers to a neuropeptide receptor called VIPR1, which is reduced in the auditory cortex of individuals with WBS. The reduction in VIPR1 was also found in cerebral organoids, advanced models made in the laboratory using human induced pluripotent stem cells.

The scientists found that the transcription factor Gtf2ird1, encoded by one of the 27 genes lost in those with WBS, regulates VIPR1. Deleting or overexpressing VIPR1 in the auditory cortex can mimic or reverse the auditory effects seen in WBS. Thus, it is Gtf2ird1 downregulating VIPR1 that is responsible for the impact of WBS on auditory ability.

“I didn’t know a lot about VIPR1 before it popped up in our data because the role of this family of receptors in the brain is under-appreciated compared to other neuromodulator or neurotransmitter receptors,” said first-author Christopher Davenport, St. Jude Department of Developmental Neurobiology. “Our findings show that they can strongly impact information processing and behavior and are likely relevant for other behaviors and diseases as well.”

“This work suggests that reducing neuronal hyperexcitability might be a general mechanism for treating WBS through targeting VIPR1,” Zakharenko said. “It also opens up new directions to learn about musicality and how our brain differentiates sounds based on these findings in models of WBS.”

The study was supported by grants from the National Institutes of Health (R01MH097742, R01DC012833), the Stanford Maternal and Child Health Research Institute Uytengsu-Hamilton 22q11 Neuropsychiatry Research Program and ALSAC, the fundraising and awareness organization of St. Jude.

St. Jude Children's Research Hospital is leading the way the world understands, treats and cures childhood cancer and other life-threatening diseases. It is the only National Cancer Institute-designated Comprehensive Cancer Center devoted solely to children. Treatments developed at St. Jude have helped push the overall childhood cancer survival rate from 20% to 80% since the hospital opened 60 years ago. St. Jude freely shares the breakthroughs it makes, and every child saved at St. Jude means doctors and scientists worldwide can use that knowledge to save thousands more children. Families never receive a bill from St. Jude for treatment, travel, housing and food — so families can focus on helping their child live. To learn more, visit stjude.org or follow St. Jude on social media at @stjuderesearch. 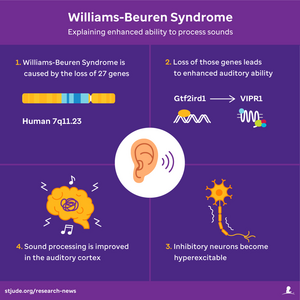