Scientists from Nanyang Technological University, Singapore (NTU Singapore) have mapped out the molecular structure of a key part of our chromosomes called telomeres, which play a pivotal part in ageing and cancer.

The NTU team discovered that the building blocks of telomeres are stacked in columns like a spring. They also found that the shape of telomeres leaves a part of the DNA exposed and unprotected, leaving it more susceptible to damage than previously thought.

The researchers said that their advance in genetic research would aid in explaining why humans age and develop cancer.

Telomeres are protective caps at the ends of the DNA molecules that make up our chromosomes. Like the plastic tips on the ends of shoelaces, the telomeres’ function is to cap and protect the ends of the chromosome from damaging themselves by sticking to each other or fraying.

Previously, due to its chemical instability and complex repetitive nature, scientists have struggled to duplicate enough telomeric DNA in the laboratory to be able to use electron microscopes to observe how it is structured.

In their study published this month in the journal Nature, the researchers adapted existing processes to replicate DNA and saw that in telomeres, the nucleosomes, which contain tightly packed strands of DNA (deoxyribonucleic acid), are stacked in columns around chromosomal proteins called histones (see Figure 1).

Professor Lars Nordenskiöld, Chair of NTU’s School of Biological Sciences, who led the study, said: “Our study showed that telomeres are not structured in the zig-zag formation as depicted in textbooks, but rather in columns and a spring formation. This leaves the crucial part of the DNA – its helix – exposed. This helps us understand how telomeres, despite their essential role in preventing damage to DNA, are themselves hotspots for DNA damage. Our study will help researchers and doctors understand the reasons behind how telomeres are damaged at a molecular level, as detailed research on the structure of the DNA within telomeres and external factors, such as proteins and other cell processes, is limited.”

The study, which represents an advance in understanding the underlying biology of how the human body ages and becomes susceptible to diseases, reflects NTU's commitment to responding to the needs and challenges of healthy living and ageing, which is one of four humanity’s grand challenges that the University seeks to address through its NTU 2025 strategic plan.

To arrive at their results, the researchers used a state-of-the-art cryogenic electron microscope at the NTU Institute of Structural Biology to probe the structure of telomeres.

Besides growing knowledge of how telomeres are involved in processes such as ageing and DNA damage, the findings by the NTU research team may also be useful in developing potential treatments for diseases that are caused by dysfunctional telomeres.

These include aplastic anaemia when the human body stops producing enough new blood cells and dyskeratosis congenita, a rare genetic form of bone marrow failure, and the inability of the marrow to produce sufficient blood cells, which typically results in death by the age of 30.

Dr Aghil Soman, Research Fellow at NTU’s School of Biological Sciences, who co-authored the study, said: “A specific future focus in our study of DNA will be how our structure interacts with previously discovered telomere-specific factors, with a keen focus on factors associated with cancer development and longevity. Our structure also provides an avenue to improve small molecule anticancer drugs. Armed with the structure of telomeric nucleosome assemblies, we can now potentially design anticancer drugs that solely target telomeres with high affinity. This would help overcome the limitation of drugs like cisplatin, which although it kills cancer cells in humans, also causes damage to the kidneys, liver, and brain.”

Prof Nordenskiöld added: “The organisation of the proteins in telomeres, at the molecular level, revealed in this work, paves the way for further structural studies. This can shed light on the structure–function relationship of telomeres in the context of ageing and cancer. It can also provide a template to develop treatments for genetic diseases. From our study, we also discovered elegant grooves formed by DNA that suggest how remodelling might happen within telomeres. This could provide a future platform for studies on drugs to target damage at the telomeric level. 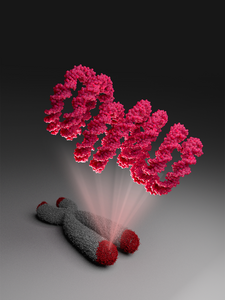