The study, published January 15 in Global Change Biology, is based on eight years of data on humpback whale pregnancies (2013 to 2020) in waters along the Western Antarctic Peninsula, where krill fishing is concentrated.

Lead author Logan Pallin, a postdoctoral researcher in the Ocean Sciences Department at UC Santa Cruz, said the study demonstrates for the first time the link between population growth and krill availability in Antarctic whales.

“This is significant because until now, it was thought that krill were essentially an unlimited food source for whales in the Antarctic,” said Pallin, who earned his Ph.D. in ecology and evolutionary biology at UCSC while working on this study. “Continued warming and increased fishing along the Western Antarctic Peninsula, which continue to reduce krill stocks, will likely impact this humpback whale population and other krill predators in the region.”

“This information is critical as we can now be proactive about managing how, when, and how much krill is taken from the Antarctic Peninsula,” he added. “In years of poor krill recruitment, we should not compound this by removing krill from critical foraging areas for baleen whales.”

Coauthor Ari Friedlaender, professor of ocean sciences at UC Santa Cruz, said the Western Antarctic Peninsula is experiencing some of the fastest climatic warming of any region on the planet. Winter air temperatures have risen significantly since the 1950s, and the annual sea ice extent is, on average, 80 days shorter than four decades ago.

“Krill supplies vary depending on the amount of sea ice because juvenile krill feed on algae growing on sea ice and also rely on the ice for shelter,” Friedlaender said. “In years with less sea ice in the winter, fewer juvenile krill survive to the following year. The impacts of climate change and likely the krill fishery are contributing to a decrease in humpback whale reproductive rates in years with less krill available for whales.”

Coauthor Chris Johnson, the global lead of the World Wide Fund for Nature’s Protecting Whales & Dolphins Initiative, said this research shows that highly precautionary management measures are needed to protect all Antarctic marine life that depends on krill for its survival, including blue, fin, humpback, minke, and southern right whales, as well as other krill predators such as penguins, seabirds, seals, and fish.

“Krill are not an inexhaustible resource, and there is a growing overlap between industrial krill fishing and whales feeding at the same time,” Johnson said. “Humpback whales feed in the Antarctic for a handful of months a year to fuel their annual energetic needs for migration that spans thousands of kilometers. We need to tread carefully and protect this unique part of the world, which will benefit whales across their entire range.”

Pallin and Friedlaender collaborated on this research with coauthors from multiple national and international universities, NGOs, non-profits, and government agencies. This work was supported in part by the National Science Foundation, National Geographic Society, and Marine Mammal Commission.

The authors have no competing interests. 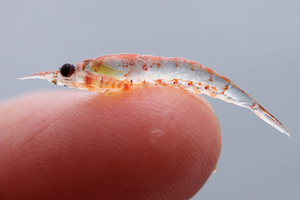 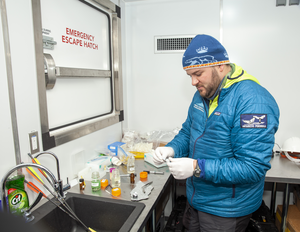