If the UN Sustainable Development Goal to lift over one billion people out of poverty were to be reached in 2030, the impact on global carbon emissions would be minimal. That sounds good; however, the main reason for this is the huge inequality in the carbon footprint of rich and poor nations. This conclusion was drawn by scientists from the Energy and Sustainability Research Institute of the University of Groningen (the Netherlands), together with colleagues from China and the US. They based their conclusion on an analysis of a new Consumption and Poverty Dataset that was established in collaboration with the World Bank. Their results were published in Nature Sustainability on 14 February 2022.

In 2015, the UN formulated their Sustainable Development Goals as a ‘blueprint to achieve a better and more sustainable future for all’. In that same year, the Paris Agreement on climate change was signed, aimed at limiting global warming. One of the Development Goals is to eradicate extreme poverty and bring half the number of people who are poor by national standards above the poverty line by 2030. This will have an impact on carbon emissions, although estimates on how much impact this would have are, so far, not very accurate.

Benedikt Bruckner, a Master’s student of Energy and Environmental Sciences at the University of Groningen, studied the literature on this topic as part of a Master’s research project and realized that he might be able to come up with a more accurate prediction. Klaus Hubacek, his supervisor and Professor in Science, Technology, and Society, had access to a new and very detailed dataset on consumption, which was compiled in collaboration with the World Bank. ‘Only a limited part of it is made public at this time. However, since we helped shaping its construction we were able to use the full set,’ explains Hubacek. This full World Bank Consumption Dataset distinguishes between 201 different expenditure categories in 116 different countries, representing about 90 percent of the global population.

Bruckner used data to calculate – in unprecedented detail – the carbon footprint of expenditures of different groups in these countries. He also included the national poverty lines in each of these countries. ‘With this information, I was able to calculate what the effect of poverty alleviation on carbon emissions would be when someone would move from an expenditure group below the poverty line to one above it,’ he explains. The carbon emissions were not just calculated nationally; Bruckner used an environmentally extended multi-regional input-output approach to include emissions from the global supply chain as well.

Using this method, Bruckner could take into account that crossing the poverty line in a rich country would cause a bigger change in the carbon footprint than in a poor country. The results of his analysis showed that lifting over one billion people out of poverty worldwide would increase the global carbon emissions by 1.6 to 2.1 percent. ‘The reason for this is a huge inequality in carbon emissions,’ explains Bruckner. Total emissions of the richest 1 percent of the world population are in fact 50% larger than those of the poorest 50 percent.

The good news is that we do not have to worry about carbon emissions when striving to lift people out of poverty. The bad news is that a tiny minority of rich people emit most of the carbon that is driving global warming. Hubacek: ‘In Europe, an average person emits about six tonnes of carbon per year. But most people in poverty emit less than one tonne. And the super-rich of this world have carbon emissions of over one thousand tonnes.’ Previous work by his group, and others, shows that the higher the income, the higher the consumption of goods and, therefore, carbon emissions.

All this basically means that in order to reach the Paris Agreement goals, rich nations will have to curb their consumption of goods and, thus, reduce their carbon emissions. ‘Consuming less is the only option,’ says Hubacek. The idea that economic growth can be uncoupled from carbon emissions is unrealistic. ‘Only a few of the richest countries have achieved this uncoupling from carbon emissions. But there are other limits that we shouldn’t cross either, like biodiversity loss. Technology won’t save the day.’ Bruckner adds: ‘Our study shows that the responsibility to reduce carbon emissions lies with the rich countries. We need to give poorer countries the opportunity to lift their people from poverty.’

Impacts of Poverty Alleviation on National and Global Carbon Emissions 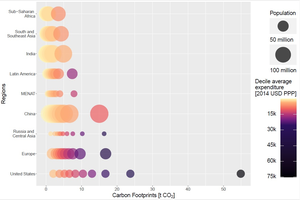 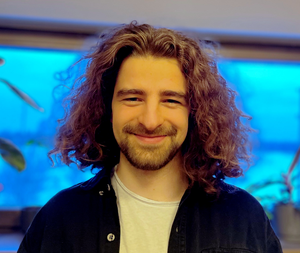