When thinking about quantum mechanical systems, single photons and well-​isolated ions and atoms may spring to mind, or electrons spreading through a crystal. More exotic in the context of quantum mechanics are genuinely mechanical quantum systems; that is, massive objects in which mechanical motion such as vibration is quantized. In a series of seminal experiments, quintessential quantum-​mechanical features have been observed in mechanical systems, including energy quantization and entanglement. However, with a view to putting such systems to use in fundamental studies and technological applications, observing quantum properties is but a first step. The next one is to master the handling of mechanical quantum objects, so that their quantum states can be controlled, measured, and eventually exploited in device-​like structures. The group of Yiwen Chu in the Departement of Physics at ETH Zurich has now made major progress in that direction. Writing in Nature Physics, they report the extraction of information from a mechanical quantum system without destroying the precious quantum state. This advance paves the path to applications such as quantum error correction, and beyond.

The ETH physicists employ as their mechanical system a slab of high-​quality sapphire, a little under half a millimetre thick. On its top sits a thin piezoelectrical transducer that can excite acoustic waves, which are reflected at the bottom and thus extend across a well-​defined volume inside the slab. These excitations are the collective motion of a large number of atoms, yet they are quantized (in energy units known as phonons) and can be subjected, in principle at least, to quantum operations in very much the same ways as the quantum states of atoms, photons and electrons can be. Intriguingly, it is possible to interface the mechanical resonator with other quantum systems, and with superconducting qubits in particular. The latter are tiny electronic circuits in which electromagnetic energy states are quantized, and they are currently one of the leading platforms for building scalable quantum computers. The electromagnetic fields associated with the superconducting circuit enable the coupling of the qubit to the piezoelectrical transducer of the acoustic resonator, and thereby to its mechanical quantum states.

In such hybrid qubit–resonator devices, the best of two worlds can be combined. Specifically, the highly developed computational capabilities of superconducting qubits can be used in synchrony with the robustness and long lifetime of acoustical modes, which can serve as quantum memories or transducers. For such applications, however, merely coupling qubit and resonator states will be not enough. For example, a straightforward measurement of the quantum state in the resonator destroys it, making repeated measurements impossible. What is needed instead is the capability to extract information about the mechanical quantum state in a more gentle, well-​controlled manner.

Demonstrating a protocol for such so-​called quantum non-​demolition measurements is what Chu’s doctoral students Uwe von Lüpke, Yu Yang and Marius Bild, working with Branco Weiss fellow Matteo Fadel and with support from semester project student Laurent Michaud, now achieved. In their experiments there is no direct energy exchange between the superconducting qubit and the acoustic resonator during the measurement. Instead, the properties of the qubit are made to depend on the number of phonons in the acoustic resonator, with no need to directly ‘touch’ the mechanical quantum state — think about a theremin, the musical instrument in which the pitch depends on the position of the musician’s hand without making physical contact with the instrument.

Creating a hybrid system in which the state of the resonator is reflected in the spectrum of the qubit is highly challenging. There are stringent demands on how long the quantum states can be sustained both in the qubit and in the resonator, before they fade away due to imperfections and perturbations from the outside. So the task for the team was to push the lifetimes of both the qubit and the resonator quantum states. And they succeeded, by making a series of improvements, including a careful choice of the type of superconducting qubit used and encapsulating the hybrid device in a superconducting aluminium cavity to ensure tight electromagnetic shielding.

Quantum information on a need-​to-know basis

Having successfully pushed their system into the desired operational regime (known as the ‘strong dispersive regime’), the team were able to gently extract the phonon-​number distribution in their acoustic resonator after exciting it with different amplitudes. Moreover, they demonstrated a way to determine in one single measurement whether the number of phonons in the resonator is even or odd — a so-​called parity measurement — without learning anything else about the distribution of phonons. Obtaining such very specific information, but no other, is crucial in a number of quantum-​technological applications. For instance, a change in parity (a transition from an odd to an even number or vice versa) can signal that an error has affected the quantum state and that correcting is needed. Here it is essential, of course, that the to-​be-corrected state is not destroyed.

Before an implementation of such error-​correction schemes is possible, however, further refinement of the hybrid system is necessary, in particular to improve the fidelity of the operations. But quantum error correction is by far not the only use on the horizon. There is an abundance of exciting theoretical proposals in the scientific literature for quantum-​information protocols as well as for fundamental studies that benefit from the fact that the acoustic quantum states reside in massive objects. These provide, for example, unique opportunities for exploring the scope of quantum mechanics in the limit of large systems and for harnessing the mechanical quantum systems as a sensor. 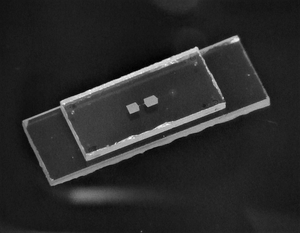