Opium poppy is an annual or biennial herb of the genus Papaver. It is the main ingredient for the preparation of opium, which has been prohibited for unauthorized cultivation. However, the morphological similarity between opium poppy and its related species challenges the judgment of illegal planting of opium poppy.

In order to accurately and efficiently identify the original plant of opium poppy in the anti-drug system, the Medicinal Plant Resources Group from the Wuhan Botanical Garden of the Chinese Academy of Sciences carried out research on opium poppy-specific molecular markers. Opium poppy with different morphological characteristics and six other species of the genus Papaver distributed in China were taken as the materials.

In addition, two opium poppy-specific single nucleotide polymorphism (SNP) loci were developed for the first time by simplified gene sequencing technology, which could accurately identify the opium poppy and its related species.

The SSR and SNP molecular markers developed in this study effectively improve the efficiency and accuracy of opium poppy identification, which is of great significance for the rapid and accurate detection of cases related to the drugs original plant of opium poppy.

This work, supported by the National Key Research and Development Program of China, has been published in International Journal of Legal Medicine entitled "Development of SSR and SNP markers for identifying opium poppy."

More on this Article Highlight 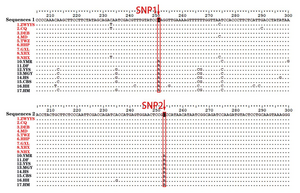