Leticia Sandoval lost another one.

“They don’t look like the picture of health, but I didn’t expect to lose so many in the first year,” she said.

As part of one of the largest coastal research projects ever funded in the U.S., the graduate student at The University of Toledo is witnessing the spread of ghost forests along the Great Lakes, haunted by a decade of rising water levels and climate change wreaking havoc on trees.

“I’ve always loved living in Toledo and near the Great Lakes,” said Sandoval, who is working toward a master’s degree in biology. “I have a lot of family here. I like the changing seasons. And I think it’s a great place to live due to climate change. I think people who move to Florida or California are crazy. That used to be the glamorous place to live but now I’m worried about them.”

Opening her eyes to a shrinking oasis in her own backyard, her high-tech UToledo field work includes creating wireless wetlands, uplands and coastal forests as an important part of the U.S. Department of Energy’s $20-million COMPASS Project examining the delicate dance between vegetation, soil and hydrology.

COMPASS, which stands for Coastal Observations, Mechanisms and Predictions Across Systems and Scales, zeroes in on two regions: western Lake Erie and the Chesapeake Bay. One is freshwater and one saltwater.

“In environments like the Great Lakes it’s raining more these days than it was 50 years ago, and more of that rain is coming in the form of big, intense storms,” said Dr. Michael Weintraub, a professor of soil ecology at UToledo and co-principal investigator of COMPASS. “Due to rising water levels over the past decade, areas that used to be dry land and had plants that grow on dry land are now completely under water. One of the consequences is, without oxygen, microbes wind up producing methane, which is about 30 times more potent as a greenhouse gas than carbon dioxide.”

Right now, scientists can’t predict how changes in climate and water levels are going to affect the exchange of greenhouse gases with the atmosphere in coastal environments.

The goal of COMPASS is to collect data to develop new and improved ecosystem models that will help forecast how these systems will function under conditions that humans have never seen before.

“Very much like trying to understand the health of an organism, like a human being, we’re trying to understand the physiology of this ecosystem,” Weintraub said. “For example, how are the plants functioning? What happens to plant function when plants get stressed by flooding? We have tapped into the veins of trees and we’re measuring sap flow and how sap flow responds to things like flooding.”

Stationed in the Ottawa National Wildlife Refuge along Lake Erie about a 30-minute drive from UToledo’s Main Campus, Sandoval is in charge of tree sensors at several sites from uplands into wetlands. Focused on sap flow, she monitors water and energy movement from underground to the canopy of trees.

Though she can remotely access the continuous measurements uploaded every 15 minutes to a data archive, Sandoval needs to go back out and drill into a new tree every time one of her study trees dies.

“I put a metal tube in there and then a sensor goes inside the tube that’s inside the tree,” she said. “It’s a paired system. There’s two holes, one lower and one higher. The sensor on the bottom is heated. The difference in the heat between them tells you the velocity of the sap flow.”

Just like when a hospital monitor shows no brain waves or heartbeat, the graduate student researcher sees the rising water levels killed another tree when the graph flatlines.

“You know it’s dead when it’s not moving sap during the growing season,” Sandoval said.

Monitoring a once verdant woodland transform into a ghost forest of dying timber, she is working alongside a team of UToledo faculty researchers, post-doctoral researchers and technicians and scientists from the U.S. Department of Energy’s national laboratories and SERC.

“The summer along Lake Erie was hotter than I imagined,” said Dr. Roberta Peixoto, a postdoctoral researcher at UToledo from Brazil who is in charge of measuring the greenhouse gas coming out of the ground at the marsh.

Peixoto and her husband Dr. Fausto Silva, also a post-doc at UToledo, moved their family to Toledo in March specifically to work with the University on the COMPASS project.

They explain to their 2-year-old and 5-year-old children that they are performing medical check-ups on nature.

“In COMPASS, we are nature’s doctors,” Peixoto said. “We are trying to understand whether coastal forests are sick due to water level changes, feeding models with crucial data for climate forecast. We measure tree health to discover the mechanisms involved in the loss of vegetation.”

Peixoto, who earned her master’s degree and doctorate at the Federal University of Rio de Janeiro, is deploying equipment about the size of a briefcase that measures what’s called greenhouse gas flux in real-time out in the field.

It’s the same work she did in the Amazon rainforest that resulted in several groundbreaking discoveries, including that flooded forests in the Amazon are important, overlooked methane emitters via tree stems.

“Methane is a greenhouse gas with a larger capacity of global warming than carbon dioxide,” Peixoto said.

She places chambers in the soil or wraps them around tree stems and connects those chambers to an infrared gas analyzer using gas-tight tubes. The technology can quantify greenhouse gas such as carbon dioxide and methane. This tool allows her to calculate greenhouse gas fluxes and monitor how flooding is affecting different processes in the field such as microbial respiration in the soil, plant growth or the transport of gases through tree stems.

Though she and her husband, who met in Brazil during their Ph.D. studies 10 years ago, monitor different things at Ottawa National Wildlife Refuge along Lake Erie’s coastline, their research complements each other.

Silva collects water quality data. For example, he sticks tiny tubes down into the ground and draws water samples from underground.

“He is monitoring the oxygen concentration, pH and redox potential in soils and groundwater, which are all control factors of the greenhouse gas emissions that I am monitoring,” Peixoto said. “Any small changes in these parameters because of drought or flooding conditions will directly interfere in the production of greenhouse gas and consequently in their fluxes to the atmosphere.”

“From the top of the trees to the bottom of the water table, there’s a lot going on,” said Dr. Solomon Ehosioke, a postdoctoral research associate and geophysicist at UToledo. “I’m interested in the soil and groundwater processes, as well as the exchanges between soil, water and plant roots.”

They run an 84-meter-long cable, about the majority of a football field, with little electrodes sticking into the ground.

“Using a resistivity meter, we inject an electrical current into the soil up to 19 meters deep and get feedback in terms of how the soil materials interact with the electrical current,” Ehosioke said. “From there we can infer the properties of the soil at different depths without the need to dig the ground and disturb the natural processes taking place.”

That data combined with soil analysis and groundwater investigations will help the team understand how the flow of groundwater controls changes in soil properties, and the different processes happening in the wetland such as microbial growth, green house fluxes and redox potential changes.

“It’s nice to work with other people with different backgrounds because we complement each other in terms of our expertise and encourage the sharing of information, which is helpful to better understand our data from diverse perspectives,” Ehosioke said.

“We’re measuring nutrient availability to plants and nutrient cycling and decomposition and microbial activity because that controls the production of these greenhouse gases that we care about,” Weintraub said. “And we’re also studying the hydrology because water level fluctuations are so important for controlling what plants are growing there. Too much flooding, you’re going to lose all the trees and other woody plants.”

Kovach maintains site infrastructure. A combination of a wilderness carpenter and electrician, he is constantly trying to MacGyver things to keep solar panel arrays and data network functioning while battling rodent populations that keep chewing the cables.

“We have an army of people involved in this project, and it really does provide tons of opportunities for our students, too, including undergraduates,” Weintraub said. “Studying wetlands and collecting all of this information on how the plants and soil are functioning and what the hydrology is doing involves a lot of long days in hot, sunny wetlands often in very wet, muddy conditions.”

Before setting up equipment and starting to collect data over the summer, the teams worked together beginning in March to construct boardwalks to be able to regularly access wet areas without continually disturbing the environment with their footsteps.

To get to their test sites, they traverse what looks like a balance beam, carrying heavy equipment above the swamp.

To make matters more interesting, many areas are encased in cattails taller than some researchers’ heads.

Though most of the time spent in the field this summer has been 80 degrees and humid, most wear long sleeves to protect against mosquitoes, sunburn and getting scratched — something Peixoto remembers having to do in the Amazon too.

“Imagine doing this in a thicket of rose thorns because that’s what we’re talking about at one of our primary research sites. This is incredibly hard work that our students literally pay for with their blood, sweat and tears,” Weintraub said. “But the students are so excited about the opportunity, and they are getting to work with scientists from all over the country. They’re getting to go to national labs and SERC.”

For Peixoto and Silva, the married scientists from Brazil, the ability to use their high-tech environmental experience to understand a part of the world farther away from the equator is a way to give their children a brighter future.

“Our kids were one of the reasons we decided to move to Toledo,” Peixoto said. “We were looking for a nice place where we could enjoy more nature far from the big cities like Rio de Janeiro. I really believe as scientists we have to take the opportunity of showing the world to our kids. When they spend time with us from remote areas in the Amazon to the Great Lakes in Ohio, they can connect with nature in different ways and understand how everything is connected in our planet.”

Sandoval, a UToledo graduate student, worked at Metroparks in Cleveland and Toledo and at state parks in Virginia through AmeriCorps after she graduated with her bachelor’s degree from Ohio State University, but describes COMPASS as the highest-level modern science with collaborating researchers from around the country who motivate her to become a great scientist during a time of environmental upheaval.

“They’ve been in my shoes before as they built their careers, so I’m lucky to have their guidance and access to such advanced equipment,” Sandoval said. “I’ve worked with a lot of invasive species before, so native species I don’t want to see dying. But it’s better to study them, though it’s not good to see the trees die before my eyes.”

“Are trees going to come back? We don’t know. We can’t predict that yet,” Weintraub said. “We don’t really know what water levels are going to do in the future. Are these systems going to be flooded? Are they going to experience drought? We are just getting warmed up. This is envisioned as a 10-year national-scale effort. And we’re in on it from the beginning.” 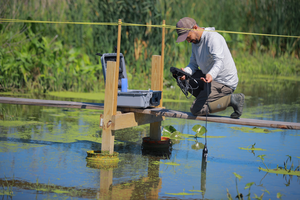 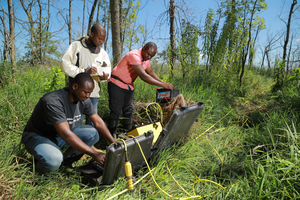